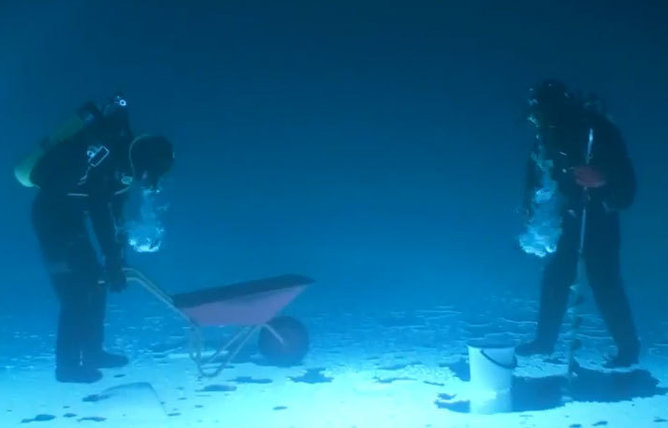 You may have already seen this video and not really given it  a thought.  If you haven’t watched this.  Please stop here, and watch it now.  Then continue reading after you have seen it.

It’s hard to really tell what is going on here or why they are doing this, but then something crazy is revealed. Would you believe these guys are upside down suspended underneath the ice due to carefully placed weights?  Seriously, it is interesting how they pulled this off.  Their feet are on the ice (notice their oxygen bubbles going down–which is really up).  Why did they do this?  I’m not so sure, but they put a lot of effort into creating it.  Check out the balloon–that is obviously not filled with air but is weighted.  Anyway, watch this video again after reading what is REALLY going on here in this formerly viral video, thanks to Robert Krulwich’s description and illustration at NPR.org:

So what just happened?

Well, to summarize: These submerged guys are walking along an icy lake floor. They have a wheelbarrow. They take some buckets of “water” and pour that “water” — or whatever it is (how can they pour water when they’re already in the water?) — into the wheelbarrow.

Then, one of them starts to ply a hole into the ice.

The fellow with the wheelbarrow walks over, tilts the wheelbarrow, spilling the “water” onto the seafloor, and once the wheelbarrow is empty (how can it be empty? It’s still filled with water), the wheelbarrow, mysteriously, starts to float upward, and then flies up, up, out of the picture, presumably to the lake surface. The fisherman catches no fish. That’s it.

This is very weird.

Actually, what it is is extraordinarily clever. This video appeared earlier this year. Four million people saw it, argued about it and decoded it. I missed the whole thing. So if this is your first time, here’s what you actually saw.

The entire film was shot upside down. 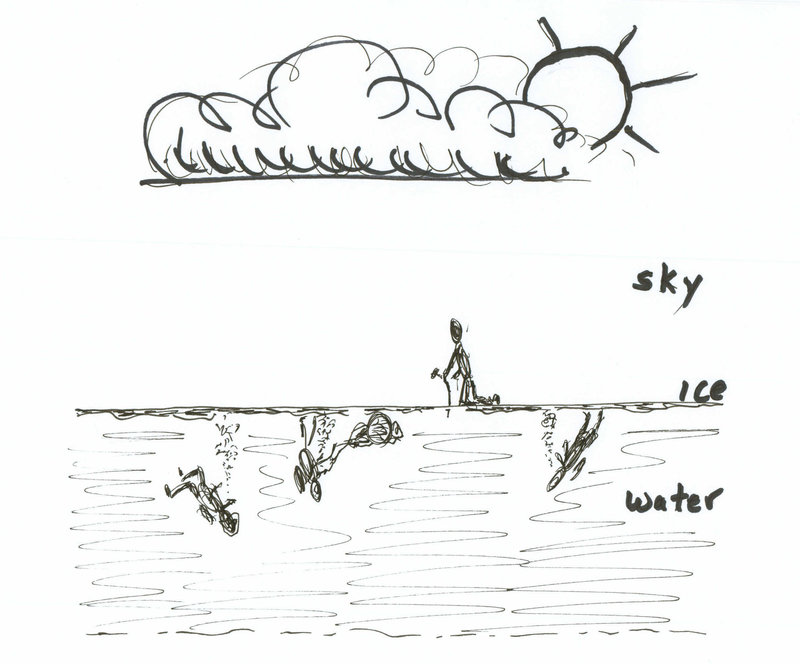 To read how they did the “water” effect and everything else, read the rest of the article by clicking here.   Now watch the video again knowing what you know.  Kind of crazy.

Now, I seriously have no idea what the purpose of this was, but after reading all this, you can’t argue there was a lot of planning that went into the video.  Even the cameraman was upside down! Interesting that somebody saw the ice and was like, “I am going to do a film and try to trick people while I’m suspended upside down underneath the ice.”  To each their own.  I have been told by people that they don’t understand why I trap, hunt and fish (mostly bowfish), so I’m nobody to judge.  It is quite an impressive prank, nonetheless.