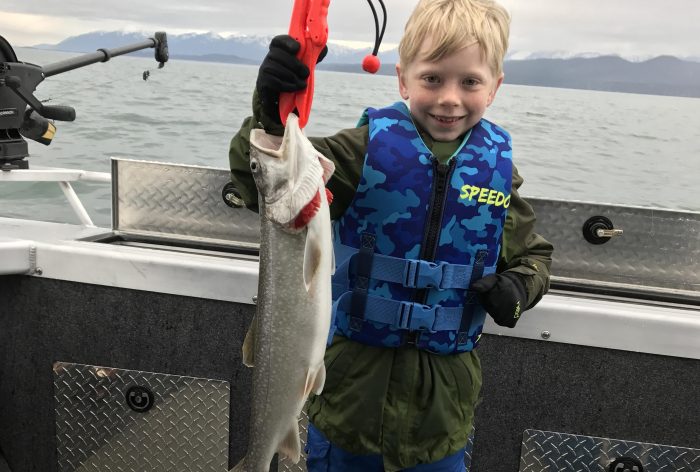 Youth angler Hayden Hall and his dad Brian of Missoula struggled to catch fish on Saturday losing several as they were coming up from the depths of Flathead Lake and the young angler was a little bit disappointed but still had a smile on his face when he came through the door. At the end of the day they had one fish that Hayden had reeled in all the way to the boat. Brian had an idea the lake trout was a tagged fish when they brought it in to enter. It had a clipped adipose fin which is the tell-tale sign for a tagged fish so they were eager to see if the scanner would beep for the tag. Sure enough it did and the smile grew bigger-especially when he was told his tagged lake trout was worth $500. It no longer mattered that it was the only fish that had landed in the boat.  Nice ending to a hard day of fishing.

Mack Days Fishing Events are sponsored by the Confederated Salish and Kootenai Tribes with Up to $225,000 in Cash and Prizes awarded at the conclusion of the event. The goal is to increase the native bull trout and cutthroat trout numbers in the lake by decreasing the numbers of the non-native lake trout. Mack Days is sanctioned by Montana Fish, Wildlife, and Parks. All it takes is one fish to be entered in the lottery style drawing that begins at $1,000.

Anglers have turned in a total of 13,694 lake trout over the first three weeks of the nine week-long event. The third weekend total was 2,366 which is the lowest weekend total so far in this event. Friday there were 1055 lake trout entered, Saturday-840, and on cold blustery Sunday a total of 471 lake trout were turned in. It was tougher fishing over the third weekend especially Sunday with the anglers having to deal with hail, rain, and swirling winds. Many anglers came off the water calling it a day early in the afternoon.

Leading the hard working lady angler category is Julie Woolley of Manteca, CA, 2nd is Florence angler Julie Vacca with 108, 3rd Brandy Hilde of Whitefish with 101, 4th Janine Kowalski of Florence with 46, and 5th Debbie Amdahl of Kalispell with 41.

Matt Guckenberg Jr. of Kalispell has 50 in the 12 and Under group followed by Rylan Cook of Butte with 33, 3rd place is held by Kayne Kirwan of Polson with 12, Logan Lang from Kalispell is 4th with 8, and Wyatt Thompson from Bigfork has 4.

Michael Benson of Lonepine came in first in the Top Ten Angler Category with catches of 40, 45, and 13 for the weekend bringing his total to 556, Felix Gauci of Stevensville moved into 2nd with his total of 511 with his weekend catches of 64, 21, and 24, Scott Bombard is in 3rd after having triple 14 days, 4th Sam Cusker of Whitefish-487, 5th Steven Benson of Four Lakes, Wa with 456, Ryan Shima of Kalispell moved to 6th with 419, Danner Shima is 7th with 417, 8th place Larry Karper of Florence with 386, Jason Mahlen of Kalispell is 9th with 366, and 10th is David McDaniel of Polson with 336.

Larry Karper of Florence continues to lead the 70 & Over Category with 386, Bob Christensen is 2nd with 167, 3rd Gary Perleberg of Bigfork with 95, Bernd Albrecht of Polson 4th with 46, and Jim Hoover of Whitefish 5th with 30.

Heaviest Bucket of Fish went to Ted Peterson and Paul Gyles of the Bitterroot with a bucket weight of 24.6 pounds for their four heaviest fish. Brian Sailer of Missoula came in second with a bucket of 22.25 pounds, 3rd Bob Christensen of Missoula with 19.25, 4th Bob and Kolton Turner of Kalispell with 15.5, and 5th Banyai Boat with 14.65 pounds. The second day of the bucket competition will be Saturday April 22nd. The third and last day of the bucket weights will be Sunday May 7th.

Entries continue to be taken until the last day of the event. Go to www.mackdays.com for information on the event, prizes, rules, etc. or telephone 406-270-3386.