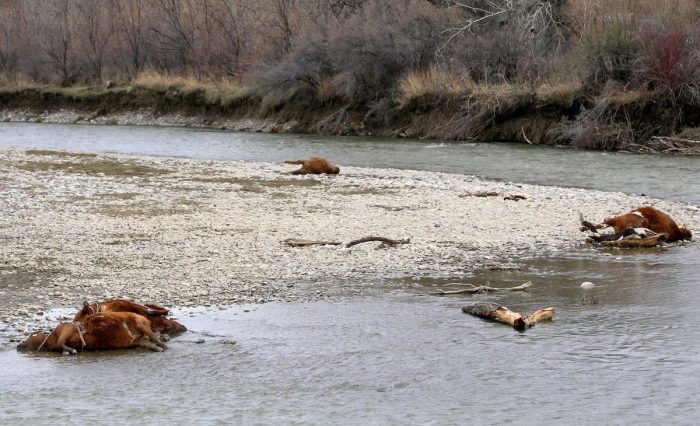 Cow Death Toll Increases on the Yellowstone River
By angelamontana

Matt Hudson, with the Billings Gazette, reported that cows were discovered dead on the bank of the Yellowstone River near Laurel this past weekend–and nobody knows to whom they belong.  This wasn’t the first sighting of dead cows around here, either…

Steve Lehenbauer started noticing them in February, when ice jams started slowly clearing near his property at the confluence of the Yellowstone River and the Clarks Fork.

Since then, more dead cows have appeared.

On Saturday, two decomposing carcasses could be seen from his property, which is about where River Road and Thiel Road meet between Laurel and Billings.

Four more were laid up in the center of the Yellowstone on a dry patch, which could be seen just to the east of the bridge. Three more lie along the shores near the Sundance Lodge Recreation Area.

Lehenbauer believes the cows didn’t die where they laid on Saturday and that they came from up on the Clarks Fork.

Apparently, no ranchers have come forward claiming the cows–which is odd because of the money that many cows could bring in for a rancher.  Lehenbauer guesses that the cows “may have wandered out onto an upriver ice field months ago and became trapped”, and he believes the rising water level will end up washing the remains downriver if no agencies end up removing and disposing of them.