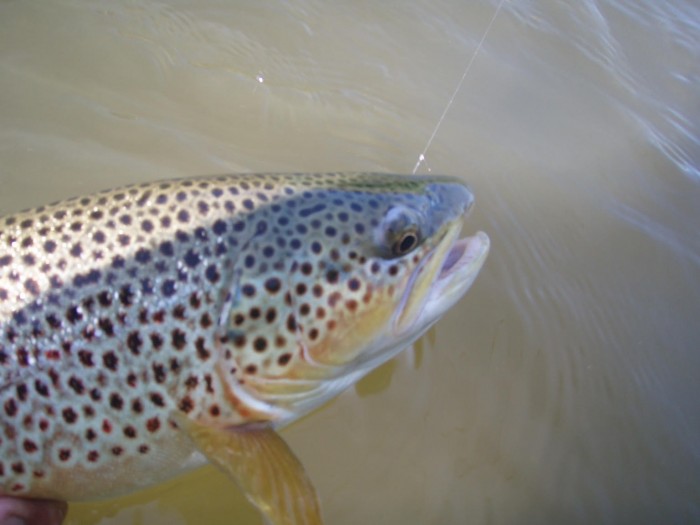 Eastern Montana Fishing Report for the Week of 4.10.17
By angelamontana

Spring is   here and with it comes sudden changes in weather and  high   water.  Outdoor enthusiasts including fishermen need to pay attention with   these changes.   Flooding can  happen   quickly so fishermen or women need to   keep in touch with the weather service.  Some water depths are at June levels already so everyone should stay alert.    Enjoy yourself but remember alcohol alters your judgment. So use it sparingly while enjoying the outdoors. Keep an eye on the weather as conditions such as temperature, wind and precipitation including snow   can   come on in fierce strength very fast. This report is compiled on Monday and Tuesday and reflects conditions and results of fishing from the past week.  If you wish other information feel­­ free to contact most parties for current daily information. Good luck fishing from the Montana Outdoor Radio Crew.

Bill reports, “This week we had two guys come up to fish.  They were catching lake trout at depths of  20 to 30 feet heading north. . No one else has come up to fish.  The docks are not in yet.  The water is 4 ½ feet above pool right now.   The   marina is still closed.  We do have cabins for rent.  So some services will be available if one of us   is around.”

Spencer says, “   It has been cold and windy this week. Not much fishing happening.   Some   fishermen headed towards    Peewee south and campers point.    The power is on in all the campsites. We have no docks in yet. The fish cleaning station is still closed. The camp sites are still first come first serve. “

Wade says,” last week was slow fishing. The lake is coming up and filling. Experienced fishermen were catching some walleye.    Rapellas were working on bass. Fishing changed from day to day.  One teen caught a 6 pound 11 ounce bass which is getting closer to the state record of 8 pounds.  I have been told they hope to have the docks in by Saturday.  The   Marina is ready and  open.  My hours for April are Monday through Thursday 8 to 6 pm.  Friday and Saturday the hours will be 8 to 8 pm in April.  Sunday will be 8 to 5 pm.  There are no docks in yet but boats are getting on.    I will   have minnows on  April 1st.       The marina is   set up to   do   SP passes.  Fishing licenses and OHV permits now.”

Carrie says,   “the lake trout fishing is about the same.  It is good.  They are also catching some   walleye and   northerns.  They are heading toward Duck Creek and   Bear Creek   to catch them. Lake trout  are at 20 to 40 feet .  The Marina Courtesy dock is in and also the Duck Creek boat ramp.   We have all the bait and tackle here you will need right now.  ”

“The water is up.  The boaters have been fishing   and catching rainbow trout. Many are about 2 ½ pounds. I am hearing only a few walleye   being caught.  They have even seen a few bass caught.  There is not much shore because of the high water level.  Some are shore fishing but there is not much room though.  There are n docks in and probably won’t be until May.  Fishermen are catching pretty much anywhere.  I know of fish caught at Overlook, Fisherman Point and Marshal point.  It has been windy and the water is a little muddy.  It is almost at full pool which I am being told that this is one of the earliest   time for that   , “ said Mark.

Ken says, “This week guys were still  fishing .  I   heard of rainbow trout being caught.  The front desk heard of a nice 3 pound bass and a cutthroat being caught this week.   The   water   is at full pool.

The guys were out trapping at Cooney.  On the last day they got a couple fish that had already spawned out.  That was kind of a surprise.  It is a little early. “

Bob explains ,”  staff has discovered fish kills at Lake Josephine, Broadwater Pond, Arapoish Pond.  Also a backwater  slough on the Yellowstone at Gritty Stone.  We also found a fish kill at Laurel Pond but have not evaluated the total number there yet.  We will be stocking where we can later.” Ken Frazer did say. “ Big Timber was able to bring a few fish down and stock a little this week.  They will do more later   as was previously scheduled in preparation for possible winter kills. “

Pat   says, “ Fishermen  were catching  fish from shore, all  salmon. Mostly small ones.   There are   boats on the water, many checking their boat out.    ”

Terry says, “I heard from one group that tried heading to Deadmans but the wind blew them off.  One fellow got a couple  nice size trout  at Martinsdale.  He was using corn. ”

“We heard that fishing was better this week from shore.  They caught some nice rainbow trout from shore .

At Martinsdale we head fishing was not too god.  We have only heard of a few fishermen out there trying.

“On Sutherland   we have not heard anything.  We had a lot of wind this week. The week before   there   was still quite a bit of ice.  It was   open around the edges but the water is cold,   “Judy says.

Charlie   says, “  They are fishing  at Crooked Creek from the bank.  It seems to be that anything has been working.  They seem to bite all kinds of bait.

On the local ponds guys are catching bass.

At Spring Creek fishermen are catching  fish  by nymphing.

As far as weather we actually had snow today.  In town there is not much but where I live out of town we have 8 inches. “

Someone   has reported they have caught some nice fish here this week.

“ We have had wind for three days.  Luckily today   (Tuesday) there is no wind.  Fishing has been   good   if you could get out.  They are finding walleye on the east side.  Going   west they are catching trout close to the shore.    The water temperature some days have been warm about 40 to 45 degrees.  Some walleye have been caught.   They are also catching trout from shore as well. Guys are heading toward Pond 1 and 2.

Jim says, “the weather has been bad this week. We had lots of wind and rain.   No one has told me they fished on Nelson  this week.   Nelson is still   filling   so the lake is rising. It is going up about   2 ½ feet a week. “

Shop hours are 8 to 6 Monday to Saturday and closed on Sunday.

On the Yellowstone going east   the catfish fishing has slowed some.  The higher water is slowing things down.

One of our guys headed to Rock Creek and definitely caught a few fish.

Someone else went to Red Lodge Creek and caught a brown trout .  ”

The weather is busy this week.  We had lots of wind, snow, rain and sleet.

I was at   Canyon Ferry yesterday and the wind was blowing 51 miles mph.  At Canyon   Ferry  people are  doing fair for  walleyes.  Most of them are not real big.  Most are 12 inchers with a few 14 to 17 inches.  They are in shallow water 3 to 5 feet.

Bill says,   “Guys are catching using dry fly midges and blue wings on the   Stillwater. A float is possible on the lower part.

The Yellowstone has a little color.

Fishing has been one day up and good and the next day not good.  So it can be tough.  There are no March browns seen yet.

On the Stillwater   you may see caddis nymphs on the rocks.  The water temperatures are driving the bug hatch. “

You can book trips now for later, just call the shop.  We are now in Spring   hours. We are closed   Monday and open Tuesday to Saturday from 9 to 5pm   and  open 9 to 1 pm on Sunday.

Beau says, ”I fished the Big Horn today.  It definitely   was really  good .  The flow is up to the high 90’s.  It was more  murky and  off color past the after bay down.  I would say it was unfishable from 13 mile down.   Due to the high water it means there is not much wadding.  Sow bugs are definitely working.  Access on and off is tricky  so  really pay attention.  Make sure you check for conditions as they could change pretty quickly.”

Colette   says,” Fishing is very good .     The water has stayed  at  10,000   cfs .  Use size 18 zebra midges or a black bead head.  Sow bugs in size 18 will also work.  Pretty much any fly that is big and chunky  will work.  For streamers try dirty hippies or a thin mint.  The  boat float is a quick float.  We are asking people to be prepared for approaches.  Make sure to pull aside at the accesses so people can come out.  They are saying that today the water is less cloudy.    Use caution wading. Access is limited.     There are a few heads popping up but not any midge fishing yet.   At this point  call the shop to learn about  renting boats out.  Call us   we will give you current daily information which is important.    ”

Alice says,” It snowed in West Yellowstone on Tuesday.  The water is colder which affects the fish.   Try nymphing with smaller nymphs like caddis and blue winged olives below a stonefly is the best option most days.  If the day is a little warmer   the mayflies and midges can hatch and fish are looking up to eat them. Stream action depends on the color of the water, which only changes below some of the smaller creeks after a warm, sunny days which we have not had many. Rainbows are still spawning so stay off the redds!   Hebegan still has ice.  I am heading to the Madison to try some fishing.  My guide friends are catching fish there. ”

Alice explains, “Fishing in the park is still closed for the season until Memorial Day weekend.”