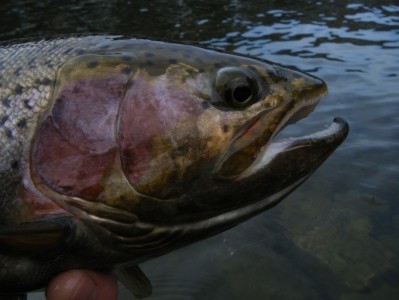 Eastern Montana Fishing Report for the Week of 4.17.17
By angelamontana

Spring is here and with it comes sudden changes in weather and High water. Outdoor enthusiasts including fishermen need to pay attention with these changes. Flooding can happen quickly so fishermen or women need to keep in touch with the weather service. Some water depths are at June levels already so everyone should stay alert. Enjoy yourself but remember alcohol alters your judgment. So use it sparingly while enjoying the outdoors. Keep an eye on the weather as conditions such as temperature, wind and precipitation including snow can come on in fierce strength very fast. This report is compiled on Monday and Tuesday and reflects conditions and results of fishing from the past week. If you wish other information feel­­ free to contact most parties for current daily information. Good luck fishing from the Montana Outdoor Radio Crew.

Rock Creek Marina-Bill 1-406-485-2560
Bill reports, “Guys were catching lake trout at depths of 20 to 30 feet heading north. The docks are not in yet. The water is 4 ½ feet above pool right now. The marina is still closed. We do have cabins for rent. So some services will be available if one of us is around.”

Tongue River Reservoir /Spencer
It was windy this week. Some fishing has been happening. Not as many fishermen with Easter weekend but some were headed towards Peewee south and campers point. The power is on in all the campsites. We have no docks in yet. The fish cleaning station is still closed. The camp sites are still first come first serve. “

Tongue River Marina 1-406-757-2225 Wade Stephanie /Warden Jordan Staley
Wade says,” The lake dropped this week a little. Some fishermen were catching fish. A few walleye have been caught at depths of 30 to 40 depths. You can catch a few crappies Rapellas were working on pike. The storm systems means fishing changes from day to day. It really messes with things. Someone caught a 20 to 25 pound pike at the dam. The Marina is ready and open. My hours for April are Monday through Thursday 8 to 6 pm. Friday and Saturday the hours will be 8 to 8 pm in April. Sunday will be 8 to 5 pm. There are no docks in yet but boats are getting on. I have minnows, leaches and crawlers. You can even pre-order. The marina is set up to do SP passes. Fishing licenses and OHV permits now.”

Clint Thomas- Hell Creek Marina 1-406- 557-2345 Marina Matheson-Park Hell Creek-Fort Peck Reservoir east to
Staff says, “ Fishing is fairly decent. Guys are bringing their boat up and are not doing too bad on lake trout and northerns. They are finding cranks are working. They are going to depths of 10 to 25 feet depths for lakers . Pike have been 8 to 12 pounds. “ We are open 7 days a week, 7 am to 6 pm now. ­­­­­­­
The park manager for Hell Creek State Park is Marina Matheson.

Lake Ridge Motel Eddie and Carrie Mindt 1-406-526-3597
Carrie says, “It has been windy and cold this week. the lake trout fishing is about the same. It is good. They are also catching some walleye and northerns. Guys are heading mostly to
Duck Creek . They are jigging with minnows for walleyes. Lake trout are at 20 to 40 feet . The Marina Courtesy dock is in and also the Duck Creek boat ramp. We have all the bait and tackle here you will need right now. ”

Cooney Reservoir -Glennis, Mark is the new game warden at Cooney.
“ The walleye seem to be caught form boats. They seem to be using a crappie jig. Shore fishermen are catching rainbow trout. There is not much shore because of the high water level. There are no docks in and won’t be put in until May. We are doing some repairs so they can all go in together. It is almost at full pool. The parking lot last weekend was half full already on Friday so Easter weekend was busy , “ said Glennis.

Lake Elmo FWP Bob Gibson
Ken says, “I think there is quite a bit of fishing pressure. This week guys were still fishing . Rainbow trout were being caught. Right now there is a fellow fly fishing but I have not seen any fish on the line yet. “

Winter Fish Kills noted:
Bob explains ,” staff has discovered fish kills at Lake Josephine, Broadwater Pond, Arapoish Pond. Also a backwater slough on the Yellowstone at Gritty Stone. We also found a fish kill at Laurel Pond but have not evaluated the total number there yet. We will be stocking where we can later.” Ken Frazer did say. “ Big Timber was able to bring a few fish down and stock a little this week. They will do more later as was previously scheduled in preparation for possible winter kills. “

Deadmans Tony Stefani
Pat says, “ We were surprised for the weekend we had 6 to 7 people fishing. A couple were in boats but the rest were on the shore. I don’t know if they were catching but they were trying. ”

Deadmans/Martinsdale Cozy Corner Bar Lavina 406-636-22
Pat says, “heard from some guys that tried heading to Deadmans. They found wind and it blew them off. One fellow got a 3 to 4 trout at Martinsdale with corn. ”

“It was quiet this week because of the holiday. We heard that fishing this week found a lot of wind. It was just plain cold and windy, “Judy says.

Don’s Lewistown-Dale 1-800-879-8194
Dale says, “ We finally have a nice day today. The snow is pretty much gone.
The western part of Fort Peck is fishing well using minnows.
On the Missouri from the PM down is fishing okay. They are catching sauger . The catfish are just starting to bite.
On the local ponds guys are finding catching slow right now.
At Spring Creek fishermen are doing pretty well nymphing.
At Achley guys are being blown off because the winds have started which is the story every year. “

Crooked Creek-Grant
Some fishermen have caught some nice fish here this week.
Please Call for information. The number is 1-406-429-2999.

Silos Canyon Ferry-Sharon
“We have had wind again this week . Fishing has been good if you could get out. They are fighting the weather but leaches have worked when they could fish. The walleye have moved west toward 2 to 3 Ponds and the mouth of the river. . They are catching trout close to the shore. The water temperature some days have been warm about 40 to 45 degrees. They are also catching trout from shore as well. I do have leeches.

Jim says,” I know that guys are getting on Nelson this week with their boats. No one is saying they got anything. Nelson is still filling so the lake is rising. It is going up about 2 ½ feet a week. On then Missouri going to the Fred Robinson we did a lot of trying but had not much luck.
On Forchette some getting out but no word on how it is. “
Shop hours are 8 to 6 Monday to Saturday and closed on Sunday.

Billings-Scheels John Cooper, Dan ,Jayce
Tanner says ,”
On the Tongue I hear fishing is okay. It is a matter of quality rather than quanity right now.
On Fort Peck people say fishing is a little tough. Dead minnows seem to be working. They are catching pike and lake trout.
The Stillwater is clear and you can catch some trout. The Yellowstone is muddy.”

Rich’s Tackle Richard 406-285-4540
Rich says, “
On the weekend we got three inches of snow. I have heard from guys who are fishing on the rivers that they are catching. They have been heading to the Missouri and Madison.
On other waters I have heard fishing is slow as the water is just cold and needs to warm up. ”

Stillwater Anglers-Chris 406-322-4977
Bill says, “ Fishing has been fairly decent on the Stillwater this week. The Yellowstone River is muddy. Guys are catching using pheasant tail, girdle bugs and zebra on the The hatch is starting of March browns but the fish were not biting. The cfs is 450. A float is possible on the lower part.

The Yellowstone has a little color.
Fishing has been one day up and good and the next day not good. So it can be tough. There are no March browns seen yet.
On the Stillwater you may see caddis nymphs on the rocks. The water temperatures are driving the bug hatch. “

You can book trips now for later, just call the shop. We are now in Spring hours. We are closed Monday and open Tuesday to Saturday from 9 to 5pm and open 9 to 1 pm on Sunday.

Montana Adventures and Angling in Fort Smith Beau McFadyean 406-855-3612
Beau says, ” fishing is good. I fished the Big Horn today. It definitely was really good . The flow is up again. . Due to the high water it means there is not much wadding. The baetes are starting to hatch. Due to the high water not much activity on the surface. Sow bugs are definitely working. Access on and off is tricky so really pay attention. Make sure you check for conditions as they could change pretty quickly.”

Big Horn Trout Shop Fort Smith 666-2375
Colette says,” Fishing is very good . The water has stayed at 10,500 cfs . It is a fast float. You definitely have to beware. Nymphs and streamers are very good. Use size 18 zebra midges or a black bead head. Sow bugs in size 18 will also work. . For streamers try dirty hippies or a thin mint. Use caution wading. Access is limited. The later in the day floats are seeing more hatch. Use the size 16 blue wings and mint clusters in a 16. Use dries later in the day. At this point call the shop to learn about renting boats out. Call us we will give you current daily information which is important. ”
Our normal hours are we are closed Sunday and Monday. We are open 9 am to 2 pm now Tuesday to Saturday.

Riverside Anglers in West Yellowstone : Alice Owsley, fishing guide and outfitter 406-640-1698
Madison
Alice says,” I headed to the Missouri this week to fish with friend fishing guides. The fishing was pretty good. We had cloudy days which helps the fishing. We used blue midges. We had a good stream bite. The weather was either nice or windy so what worked one day changed the next. We were nymphing using size 18 to 20 sizes. The fish are starting to rise.
The Madison flows are up a little. It has been good for nymphing. There is not really much bug activity right now. . The water is colder which affects the fish. Try nymphing with smaller nymphs like caddis and blue winged olives below a stonefly is the best option most days. If the day is a little warmer the mayflies and midges can hatch and fish are looking up to eat them. Stream action depends on the color of the water, which only changes below some of the smaller creeks after a warm, sunny days which we have not had many. Rainbows are still spawning so stay off the redds! . My guide friends are catching fish there. ”

Yellowstone National Park
Alice explains, “Fishing in the park is still closed for the season until Memorial Day weekend.”