Some New Optics Options (with Colonel Smoothbore)
By angelamontana

Sig Sauer®, more commonly known as Sig®, has been manufacturing great firearms for decades. Producing both civilian and military handguns and rifles, Sig® recently won the coveted contract for the next generation of handguns for the U.S. military. Their excellent P320 chambered in 9MM Lugar will soon be carried into combat by U.S. soldiers and sailors worldwide. But Sig® is more than a firearms manufacturer; the company now produces both premium ammunition and some really cool optics. Here’s a brief rundown of their new optics offerings.

MRAD/MOA combination and a 5.56/7.62 and .300 Blackout caliber specific “Horseshoe Dot.” Both scopes offer SBT (Sig Ballistic Turret) laser etched turrets that can be tailored to the user’s specific load. These turrets really simplify long range shooting, I know, I have a similar setup on one of my rifles.

The Whiskey series is the hunting scope line and they are available in 5X and 3X starting with 1-5X through 3-15X and 2-7X through 4-12X respectively. SBT turrets are available and the scopes are second focal plane units.

Several small red dot and reflex sights are available. Models include the Bravo 4 4X, the Romeo 1 and Romeo 3 reflex sights, and the Romeo 4 series of red dots. These sights give users many options for quick sight access and will work extremely well for CQB and 3-gun applications. The Echo 1 is a thermal reflex sight and the Lima 1 is a rail mounted laser sight. 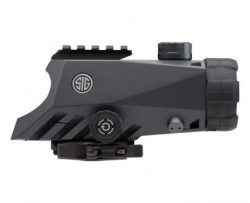 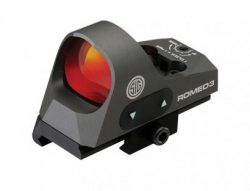 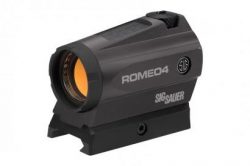 A full battery of range finders, the Kilo series, are available. These are 6X and 7X optics with the ability to range up to 2400 yards. I purchased a Kilo 2000 last winter and while my use has been somewhat limited, so far I find it a really quality optic that offers sightings at ranges I’m sure are much farther than I could shoot accurately. However, being able to know just how far away a target is will be quite helpful come this fall’s hunting season. I’ll be better able to plan a stalking route and have a better idea how I should approach my quarry.

Other Sig® products include weapon lights, spotting scopes, binoculars, and mounts. Sig’s U.S. headquarters is in New Hampshire and many of the products sold here are produced in New Hampshire. Sig® is charging into all aspects of the firearms and accessories markets. I suggest you give them a look, www.sigsauer.com.