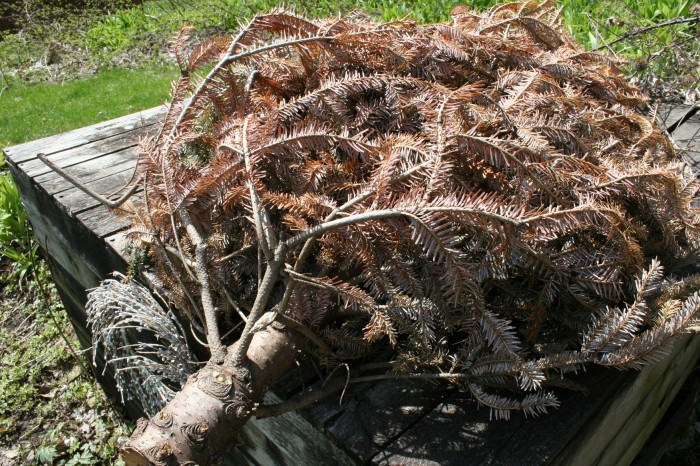 In a recent news release by the Montana FWP – Thanks to some local recycling and volunteer efforts, Spotted Eagle Lake’s habitat just got a little more inviting for resident fish.

FWP staff crafted several concrete anchors in buckets, each weighing around 60 pounds. Each anchor was fastened to several trees, then the bundles of trees were towed by boat out to an area near the lake’s center island, where they were sunk to create new habitat areas.

The Christmas trees are picked up by the members of the area chapter for Walleyes Unlimited from vendors who sell trees after Christmas, and people also drop off trees from their houses at Spotted Eagle. Walleyes Unlimited has a member who works for the City of Miles City who brings a front-end loader to clean up after the trees are sunk.

Spotted Eagle is the only water body where trees are placed for Region 7, but other regions in the state do similar projects. Anglers who visit Spotted Eagle also may find their odds of catching fish a little better, after FWP crews transferred nearly 2,500 Yellow Perch and 65 Northern Pike into the lake in early April.

Much of this article was originated from a news released by the Montana FWP web site at fwp.mt.gov.