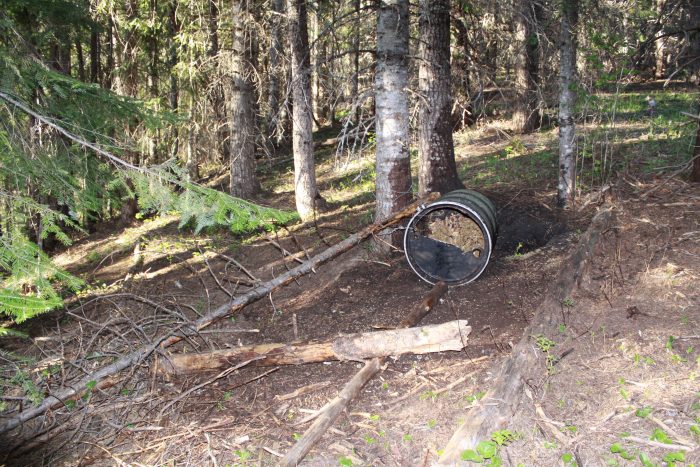 In a few select areas just west of Montana the Idaho Fish and Game Department uses bear baiting as a tool to help reduce predation on deer and elk.  Hunters often attempt bear baiting with the expectation that it’s going to be easy – but  it takes a lot more forethought and preparation than just throwing a doughnut in a barrel.  Here’s how to make a bait site work.

The key to successful bear baiting is site selection.  A high ridge can carry more scent away than a deep valley and scent dispersal is the major factor that brings bears in.  Having baits close to water is also very important.  Some sites may be hit hard early in the season then seem to fade or they may get really active later as the mating season kicks in early in June.

It is really important to keep the baits full and monitor the activity closely.  And this can be tough because of the amount a bait that is needed.  Often the biggest limiter is finding a source for baits.  Many stores won’t give away day old doughnuts anymore and buying bait-stuffs can be cost prohibitive. Other hunters nearby can reduce the numbers of bears at your site drastically.  Hauling in an extra half mile could reduce the effect other hunters have on the bears working your site.  Try to keep your sites several miles from other hunters bait sites.  I once had a site with multiple bears diminish to a trickle overnight from hunters baiting less than one mile away.  Bears will divide their time between nearby sites thereby reducing the odds of using your site by half.

Bear baiting is hard work that requires dedication and forethought.  By storing and preparing foodstuffs during the winter months, a hunter can avoid rushing to stockpile those items while maintaining bait sites during season.

To keep the baits from getting crushed by ravens and jays a metal 50 gallon drum with the lid still attached should have a hole in the lid large enough to allow bears to get to the food, yet small enough to prevent their heads from entirely fitting inside.  This keeps them at the bait longer and gets them in a broad side position as they reach in.  We also placed several small logs in the opening of the barrel to keep birds out of the barrel and to keep the bears working the bait a little longer. 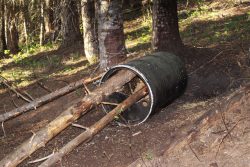 Four five gallon buckets of bait is a good volume to start with at a new bait site.  As the season goes on, close monitoring is necessary to ensure the barrel never runs dry.  More solid food items such as fat and baked goods should be added as the season progresses and bears begin searching for more solid foods.  As long as the barrel has food in it, the bears will keep coming back regularly.  If the barrel is sporadically filled – the bears’ visits will be sporadic as well. 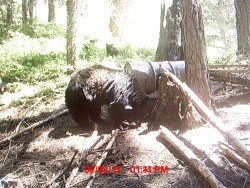 Next, select tree stand sites in preparation for hunting.  Traditional bow hunters may choose tree stand locations 10 – 15 yards from the bait barrel to get close.  If a rifle is to be used, the distance could easily be 50 – 100 yards away even in these thick forested areas.  Some older bears seem to sense a hunter is nearby and will shy away if the stand is within their “comfort zone”.  In this case, stands may need to be a minimum of 20 yards from the barrel or more.  If bears come in and circle around the bait site but won’t commit to the bait while a hunter is present, the stand should be moved further away or a ground blind built to eliminate detection.

Once a bear does come into the bait site let the bear get next to the barrel and settle down.  Bears are often nervous when they first come in and they are looking for other bears or other predators. It also allows you the chance to size the bear up – if its back is taller than a 50 gallon barrel laying on its side its likely to be “a shooter”.  Take your time and make a good shot. 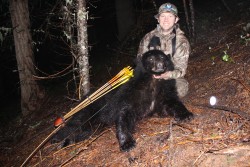