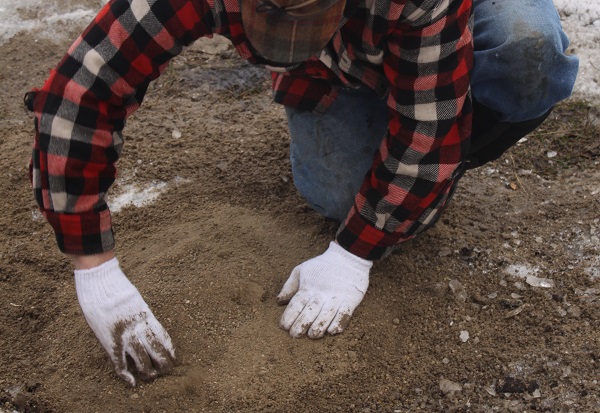 The time to think about keeping your traps working this winter is in June, July and August.  Why?  Because that is when the sun is hot enough to melt flake wax into sifted sand.

A clean, odorless tarp laid out on the ground in direct sunlight will serve well as the drying platform for the dirt.  I prefer a dry and sunny day in July or August that is 85 degrees or hotter.  As the dirt is shoveled from the trailer it is sifted onto the tarp to get unwanted leaf litter, stones and whatever else might be in there out. 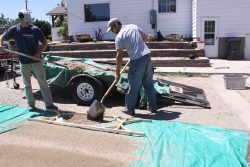 Any sifter normally used on your trapline will work, but when dealing with several hundred pounds of dirt, a bigger sifter will get the job done more efficiently.  I built a two-man sifter with handles to get the job done fast.  The sifter area is 18”x42” with the overall length of about six feet.  This dimension allows for sifting about 4-6 gallons of dirt in less than a minute with two people.  1/8” wire mesh works best, but doubling up ¼”wire mesh works almost just as effectively.

To use the sifter correctly, I lay the sifter on the ground next to the tarp and shovel two or three healthy shovels full onto the sifter.  With a person on each end, the sifter is held over the clean tarp and shaken back and forth until pebbles and leaf litter are all that remain in the sifter.  By sifting methodically over the entire tarp we are left with about 1 – 2 inches of fine sandy soil evenly covering the tarp.   A 10’ x 12’ can hold over 25 gallons of dirt at 2 “ thick. 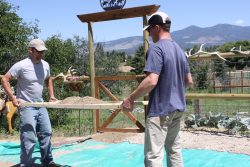 Once the tarp is covered with dirt, the sun will have already begun drying it out.  By raking the dirt every 20 -30 minutes the dirt will dry out in a couple hours on a hot day.  Having the dirt completely dry is important before adding the flake wax.  You can tell its dry when all the dirt is a light uniform color and there is none sticking to the tarp.  Be sure to rake it up thoroughly.  Using the back of a garden rake will work good without ripping the tarp.

Flake wax can be purchased in five pound bags or in bulk from a number of trapping supply stores and is very affordable.  I know trappers who have used paraffin wax but I prefer to use pure, odorless wax made especially for waxed dirt.  It is important to keep your flake wax out of the sun and store it in a cool location until the minute you are ready to add it to the dirt because if the flake wax gets too warm it will become a block of un-useable wax. 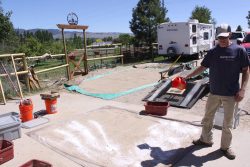 Adding the right amount of wax is important.  If too much is used, the waxed dirt will harden like a brick and becomes unusable.  Use too little and the desired moisture repelling characteristics will not be realized.  The formula is fairly simple; with 1-2 inches of dry sifted dirt, reach into the bag of flake wax and spread the flakes over the dirt until every square inch of dirt is lightly coated.  I end up using about 45 pounds of flake wax per 200 pounds of dirt or roughly a 4:1 ratio.  As the sun melts the wax, rake it into the dirt.  Continue raking and mixing until all the dirt appears dark and moist.  It is important to mix the dirt thoroughly by pulling the dirt from the bottom up and over the top until there is no dry looking dirt remaining on the tarp.

Take care to keep the depth of the dirt at about 1-2 inches and spread evenly across the tarp.  This will allow the sun to heat the dirt and wax evenly and will prevent clumping.  After a couple hours the dirt will be ready to cool.  If possible, pull the tarp into the shade and let the dirt cool slowly.  Otherwise, you’ll have to wait until evening when the sun goes down.  By slowly cooling the dirt, it will not clump.  Some minor clumps will form no matter how slowly it is cooled.  These should break apart easily and be mixed in with the rest of the dirt. 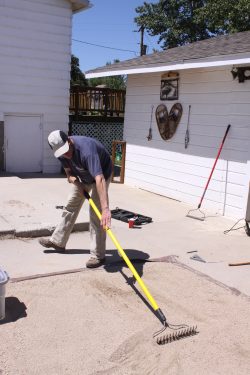 Storing waxed dirt is fairly simple.  I use clean plastic tubs or five gallon buckets with lids and place them in the shade free from any odors.   In winter, I keep about 15 gallons in the bed of my truck and carry one gallon containers with lids in my pack basket.