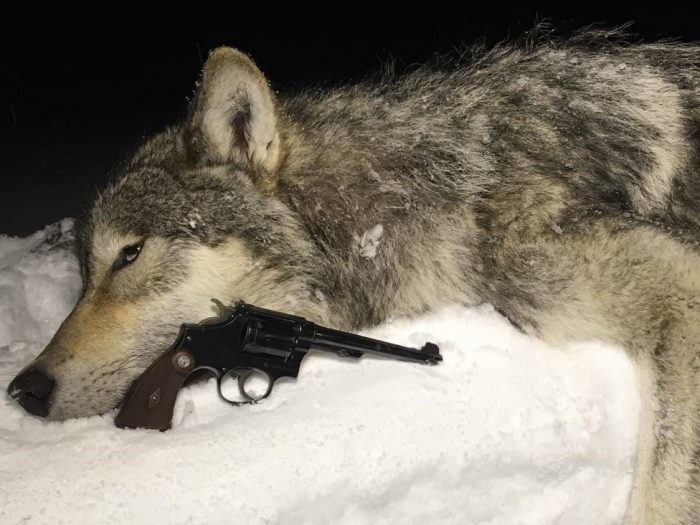 Any hunter, trapper who spends time out on the Montana landscape already knows what the latest report from the Montana Fish Wildlife and Parks shows; wolves numbers are still high – very high.

In fact wolf numbers are still three times higher than necessary to meet federal requirements.  Here’s what the report provided by way of a news release by the FWP  recently had to say:

Wolf numbers in Montana remained healthy in 2016 and more than three times the federally-mandated minimums.

“Though the minimum count is down, we’ve long held that these minimum counts are useful only in ensuring Montana’s wolf population stays above the federally-mandated minimum threshold. The minimum count is not a population count or an index or estimate of the total number of wolves,” said Bob Inman, Montana Fish, Wildlife and Parks carnivore and furbearer program chief.

The actual wolf population in Montana is hard to pin down, but FWP employs another counting method that get closer. The Patch Occupancy Model, or POM, incorporates data on territory and wolf pack sizes, along with hunter observations and known wolf locations to get to a more accurate estimation of wolf populations.

The most recent POM estimate from 2014 was 892 wolves in Montana, about 61 percent higher than the minimum counts from that year. Data for 2015 and 2016 POM counts of Montana’s wolves are being compiled and will be analyzed this summer.

The other benefit of the POM method is it’s a much cheaper undertaking since it incorporates data analysis rather than direct counting efforts.

The recovery of the wolf in the northern Rockies remains one of the fastest endangered species comebacks on record and a real success story. Montana’s wolf population remains healthy, well distributed and genetically connected.  In the mid-1990s, to hasten the overall pace of wolf recovery in the Northern Rockies, the U.S. Fish and Wildlife Service released 66 wolves into Yellowstone National Park and central Idaho. FWP began monitoring the wolf population and managing livestock conflicts in 2004. After several court challenges wolves were successfully delisted in 2011.

Much of this report came from a news release by the Montana FWP at : fwp.mt.gov .