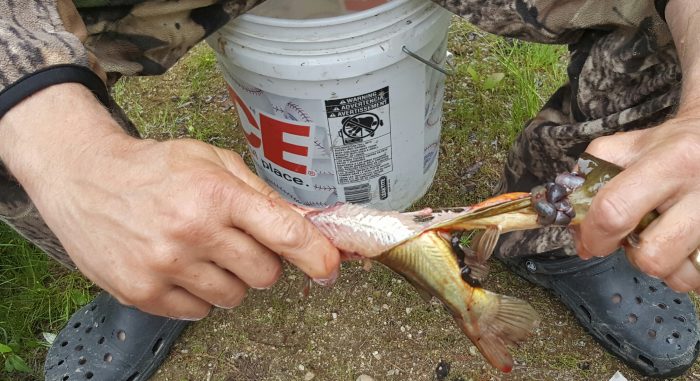 One Way To Skin A Cat…fish
By Toby Trigger

The people of western states aren’t enamored by bottom feeding catfish like eastern and southern folk are.

Perhaps it’s because catfish aren’t hiding under every bridge and log in the west.  But anglers who look for the tasty Ameirusus a.k.a Bullhead catfish can find them in Montana.

Bullhead like muddy bottomed slow moving water and grow to over 20 inches.  They don’t take lures much although I have caught a few that way.  The best thing to do is put a fat night crawler on a #4 or#2 hook about 18″ below a heavy sinker cast into bullhead water and then prop your rod against a forked stick jammed into the mud.

When the bite happens set the hook and reel ’em in.  That’s the easy part.  Now you’ve got to be careful to avoid the fins because they’ll hammer you leaving hands swollen and hurting.

Skinning cats can be done any number of ways but in order to clean dozens of these scale-less fish quickly, skinning them is without question the fastest.

Start by slicing perpendicularly across the back just behing the head. 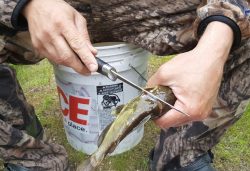 Next slice along the back on either side of the dirsal fin from head to tail. 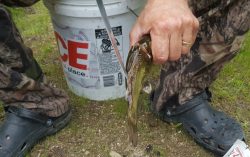 Find the tip of the severed backbone to use for a gripping point and while pulling down on the head with one hand, pull back on the body with the other hand.

Doing this right results in the head and guts in one hand and a cleaned bullhead in the other. This can be done in under 6 seconds making it the fastest way to skin a cat.