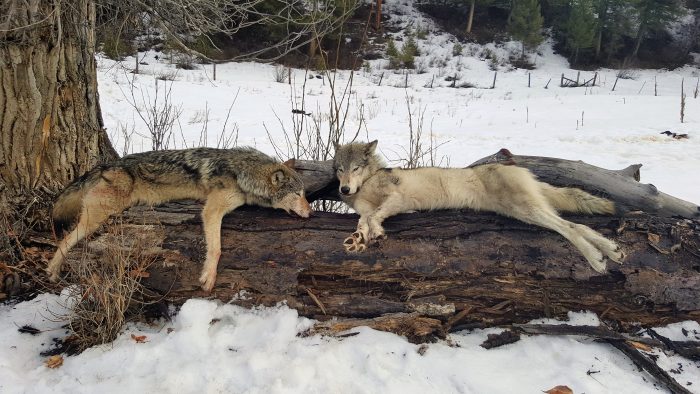 According to a recent report written by the Sportsmen’s Alliance based out of Ohio titled “Court Sides with Sportsmen on Key Issue, but Leaves Wolves Protected for Now” extreme animal rights activists groups like HSUS were forced to accept defeat in court paving the way for true wolf recovery that will benefit sportsmen.

The report published on August 1st 2017 at sportsmensalliance.org reads:

On Tuesday, Aug. 1, the U.S. Circuit Court of Appeals for the D.C. Circuit issued its ruling in the Western Great Lakes wolf lawsuit appeal. The ruling is a short-term setback, but very likely a win for sportsmen in the long run.

For the immediate future, the Appellate Court’s decision leaves Endangered Species Act listing in place, upholding the lower court’s 2014 ruling that the U.S. Fish and Wildlife Service (FWS) erred in delisting wolves in 2011. Very importantly, however, the court laid out a road map for FWS to delist the Western Great Lakes wolves on remand and dismantled many of the dangerous and unsupported holdings in the lower court decision.

Additionally, the appellate court ruled in favor of sportsmen on the most important legal issue in the case regarding the distinct population segment (DPS) definition in the Endangered Species Act and the Fish and Wildlife Service’s DPS Policy. The appellate court sided with the Sportsmen’s Alliance Foundation and our partners that the FWS has the ability to list and, as in this case, delist a species at the distinct population segment level:

“The central dispute in this case is whether the Endangered Species Act permits the Service to carve out of an already-listed species a “distinct population segment” for the purpose of delisting that segment and withdrawing it from the Act’s aegis. We hold that the Act permits such a designation, but only when the Service first makes the proper findings.” (Op. at 15-16).

This ruling means that, if the Fish and Wildlife Service takes the right steps, they are able to delist a recovered species in some places (a distinct population) without having to delist it everywhere. This flexibility will make the ESA more efficient and possibly subject to fewer legal challenges. HSUS and their partners had argued that FWS could never delist a smaller portion of a species unless the entire species had fully recovered and could be removed from the Endangered Species Act protections. HSUS has now lost that point.

“The court’s ruling that regional delisting is legally possible is a victory for sound scientific wildlife management and further upholds DPS policy of the Endangered Species Act as an important tool for conservation moving forward,” said Evan Heusinkveld, president and CEO of the Sportsmen’s Alliance. “While we clearly would have preferred that wolves be returned to state management today, this ruling provides a path forward for the Fish and Wildlife Service on how to successfully delist wolves once and for all.

“Folks in the animal-rights community would like believe that the Endangered Species Act is a one-way ratchet. In their world, you can only put species on to the Endangered Species List based upon a distinct population segment. However, we know that this is not how the ESA is written,” continued Heusinkveld. “This distorted view of the DPS policy is simply emblematic of their view of the ESA as a whole. They view this as a means to enshrine federal protections in perpetuity, as opposed to a tool to help those in need recover and be returned to state management.”

Additionally, the appellate court dismantled many of the main arguments provided by the HSUS-led coalition and holdings of the unfavorable lower court opinion:

•The court upheld FWS’s interpretation that the ESA’s definition of “range” refers to “current range” at the time of the listing or delisting decision that is the subject of the case, not “historic range,” as HSUS argued. HSUS’ interpretation would mean that populations may never be delisted if they could not rebound throughout their historic range. However, the court said FWS must consider large losses in historical range in evaluating the continuing viability of the species in its current range. On remand, FWS must decide the “baseline” date from which historical range loss is measured. One likely date could be 1973 – the year Congress enacted the ESA.

•HSUS argued the lack of state regulatory plans to monitor and protect the Western Great Lake wolves outside of their core recovery areas in Minnesota, Wisconsin, and Michigan did not support FWS’s decision to delist those wolves. The court found that the lack of separate state plans in six nearby states was not a concern because wolves are virtually non-existent in those states, and those animals that do occasionally appear there are protected by other measures or they do not significantly contribute to the WGL population.

•HSUS challenged the 2011 rule on genetics issues concerning whether there are one or two wolf species. The court rejected the HSUS argument that there were two separate species of wolves, and thereby additional protections were warranted.

•HSUS argued that FWS had inappropriately responded to political pressure from Sen. Amy Klobuchar (D, Minnesota) in adopting its wolf-delisting order. The court rejected that argument, stating that HSUS could point to no science “ignored, misused, or manipulated” or to any material change in FWS’ position in response to a letter from Sen. Klobuchar. In particular, the court cites that FWS had acted favorably in response to several delisting petitions (including the Sportsmen’s Alliance petition) before Sen. Klobuchar’s letter.

How We Got Here:

The case stems from a late 2014 decision by U.S. District Court Judge Beryl A. Howell that ruled the U.S. Fish and Wildlife Service had to return wolves found in the western Great Lakes area to the protections afforded by the Endangered Species Act. At the crux of the case was the delisting of a “distinct population segment” of wolves from the Endangered Species Act.

The lawsuit brought by Humane Society of the United States; Born Free, USA; Help Our Wolves Live; and Friends of Animals and Their Environment argued that despite a healthy population of wolves that had surpassed all recovery goals in the western Great Lakes region, since wolf populations haven’t recovered in all 50 states, the animals must remain under federal protection as an endangered species even where they have recovered.

“This 2014 ruling clearly ignored years of Fish and Wildlife Service policy, court rulings and plain common sense,” said Heusinkveld. “The idea that wolves can never be deemed ‘recovered’ in the Great Lakes states until they have recovered across the entire U.S. is a complete fantasy.”