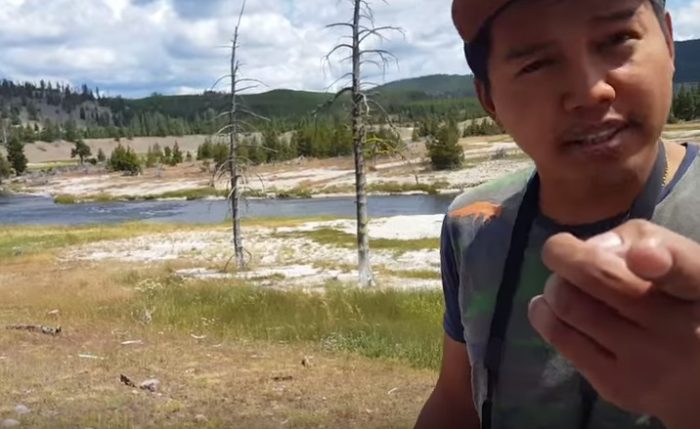 Some tourists at Yellowstone National Park have nicknames from locals, for good reason, but there are some awesome tourists who genuinely enjoy the area and follow rules and consider posted signs that are there for the preservation of the park AND the protection of people and wildlife, etc.  A group of Thai tourists at Yellowstone National Park blatantly ignored signs at the park at a thermal feature, and somebody actually recorded the incident and the ignorant reactions of the tourists disrespecting the park signs.

The person recording the video received death threats after posting this video and decided to keep it posted to educate others **UPDATE: The video is no longer available**.  Here is the info the person included with the video and the footage that was posted on YouTube in early August of 2017.  Simple thing–follow the rules and use common sense.

I came across a large group of Asian tourists (believed to be from Thailand) damaging a thermal feature in Yellowstone National Park. This took place at 1:31 pm on 7/27/2017 near the Fairy Falls trail head. Map location: https://goo.gl/maps/HJsTWKQwbtN2

After the video ends, I realized that there was no cell phone service in the area. I looked for a park ranger as my group continued our walk north on the path. When we decided to turn around, the Asian group confronted me again about the video. While leaving, at the same location the video takes place, I found a park employee. I showed him this video and he radioed the park police. At this point, the Asian group was still north of us on the trail. Police were about 15 minutes away and en route. I was giving a one day tour of the park to some guests from South America. I couldn’t blame my guests, but unfortunately they did not want to wait for police and find the Asian group as this would have taken up a large portion of their limited time. While it was disappointing that I had to leave, I did zoom in on the various people in the video to give the park employee the best chance of locating them. While driving away I passed the police officer who was on his way. I am thankful that no one got hurt, burned, or fell through. I am sorry to the guests I had as the event was upsetting to them since the gravity of the situation may not have been fully understood. Even though I received threats from the Asian group regarding this video, I am posting for education and hopefully some good comes from it.