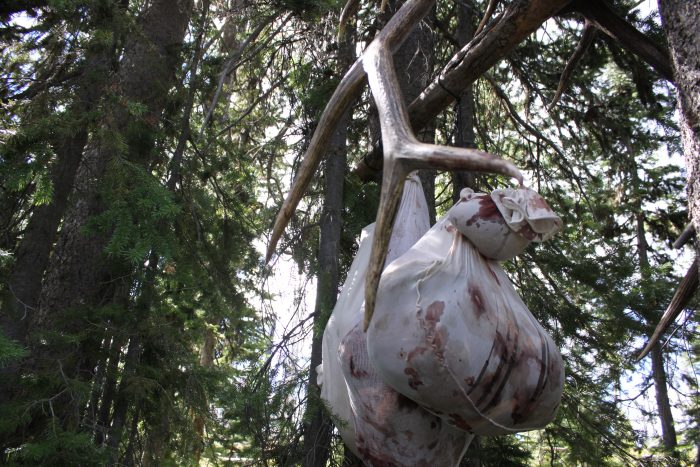 Can you Judge A Bulls Rack?
By Toby Trigger

Judging a bull rack is tough unless it’s in your hands and even good photos can be just as deceiving as a bull bugling in thick timber.

Learning to judge the quality of elk racks may be insignificant for many hunters who just want to put meat in the freezer but knowing roughly how to judge a 280″ bull to a 320″ bull is useful for sharing our hunts accurately and understanding the health of our local elk herds.

Here’s a look at racks and pics with actual scores: This pic to the right shows a dead head found by Travis Post in the Bitterroot Valley that was officially scored at 378″ the gross score was 394″.  The smaller rack that fits inside was in in the 270″ class for reference and is shown in the picture to the left below. Any bull that bests the 350″ mark is going to look extraordinary because it is!  Simply put, there aren’t a lot of bulls that exceed the 350″ mark especially on public land hunts .  The sort of gold standard trophy for many hunters is a 6×6 point bull that makes the 300 inch mark and even that is often tough for hunters to harvest.

The bull to the right green scored 328″ despite relatively short main beams because of the exceptional tine length and symmetry.  The extra point on the left actually detracts from the final score but I like it and that’s what really matters. The bull on the left looks impressive at 46 inches wide and with main beams that stretch to 51 inches it had the potential to score huge.   Total score was 312″ with a broken tine that would likely have added an additional 6 – 8 inches to the score. This same bull shown below next to my pack out crew in 2009 shows the tine length that is short overall compared to the length of the main beams.

Bulls can be difficult to judge from behind because the width often overshadows the things that add to the score like line length and thickness of the beams (measured between each point up to the fifth one).  A wide bull won’t necessarily mean a big scoring bull – of course the quality of the people who drop everything on a Sunday to help you pack out your bull out-score any tine length! The bull featured to the right shows good symmetry between tine length, girth, and main beams and with an overall score of 286″ it may be eligible for an archery record book entry.  The attribute that sets this bull apart from all the others in this post is that it was taken with a bow and is the first bull this hunter ever killed.

The meat hanging from the pole was properly cared for and packed out on the backs of hunters over rough terrain where it was cut, wrapped and frozen for countless meals to come.

I received a spot page for this bull – another first for me – that “forced” me to turn my vehicle around and head south to where I knew this hunter was and needed help packing out the meat and antlers from his first bull.

The measurement systems in pace from groups like Boone & Crockett, Pope & Young and SCI surely shows the maturity and genetic quality of the game we pursue, but – there isn’t a scoring system that can measure the success of our first bull or best back country hunt.

Good luck this season and remember to judge the quality of your hunt by standards that really matter.