In 2002, a new pistol was created; it was a European design that would be manufactured in the United Arab Emirates. The gun has a lineage to the Steyr® M. In 2006, after the pistol successfully complied with the NATO D14 standard, the German Federal Police Standard and the German Federal Armed Forces Technical Purchasing requirements, Caracal International L.L.C., was incorporated. Over the next few years the pistol became the standard service handgun of several Gulf nations. In 2009 the company received an import license to bring the pistols to the United States. In 2013 all the original Model C pistols were recalled. 2015 brought new F and C models that had two pin triggers, rather than the one pin trigger on the original recalled guns.

Now Caracal® has a U.S. subsidiary, Caracal USA and it is offering a limited edition pistol, the “Enhanced-F.” Chambered in 9 MM Luger, the gun is a polymer frame, striker fired gun. While the pistol is not revolutionary; there is no shortage of striker fired polymer guns on the market, the Caracal® is somewhat of an evolutionary design. It boasts several features including a unique sighting system. Here’s a closer look.

For me the most obvious feature is the extremely low bore axis. This will help keep muzzle rise to a minimum allowing for a quick return to the target. The frame of the gun looks to be very ergonomic with a high beavertail that will also help mitigate recoil and muzzle rise. The frame has a 4.25 inch steel slide guide that reinforces and stiffens the gun. The slide is very slim and has been machined to be as light as possible; again this will help mitigate recoil and muzzle rise.

The trigger has been designed to provide a smooth, constant pull with no stacking. The trigger safety is a blade type.  The gun weighs about 26 ounces empty and has a 4 inch barrel. It is 1.1 inches wide, about 7 inches long, and is 5.3 inches tall. It comes with two 18 round magazines and a hard case.

Sights are the now common industry standard 3 dot; however, there is another sighting option I found quite interesting. The Enhanced F also marks the return of the “Quick-Sight system,” which features a rear sight that is machined into the slide and located just in front of the ejection port. Caracal® claims this system puts both the front and rear sight in the same optical plane allowing for faster acquisition in a flash sight picture situation. In other words, the user will be able to get on target faster in close quarters combat. I like the idea for a personal defense pistol as most lethal encounters occur at 7 yards or less. Because the “Quick-Sight system” reduces the sighting plane, accuracy at longer ranges most probably will be negatively affected. If you’re looking for a target gun, look elsewhere, but this might be a really effective system in self-defense encounters. 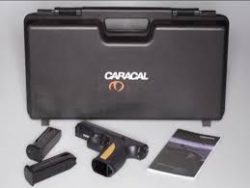 The frame of the new Enhanced F is imported, but the slide is manufactured in the U.S. In time, Caracal® plans to manufacture the pistols entirely in the United States. I am looking forward to a thorough test of the Caracal® pistol. If Caracal® guns prove to be reliable and accurate, they should be able to overcome the rocky start of a few years past. Only time will tell if they are able to compete in a very crowded market.