The Forgotten .41 (with Colonel Smoothbore)
By angelamontana 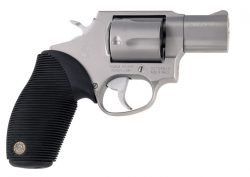 As the old saw goes, “timing is everything,” and so goes the fate of firearms cartridges. The 6 MM and .280 Remington®, the Winchester® .223, .243, and .25 WSSM rifle cartridges, and the very powerful .45 Winchester® Magnum pistol cartridge are just a few of the very, very good offerings from years 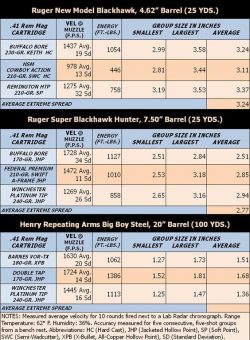 past that simply didn’t make the grade as commercial successes. One handgun cartridge that isn’t well-known or very popular is the .41 Remington® Magnum, aka the .41 Mag.

The .41 Mag was the brain child of famous handgunner Elmer Keith and a couple of his contemporaries, Bill Jordan and Skeeter Skelton. At their urging Remington® introduced the cartridge in 1964 and Smith & Wesson® chambered it in the Models 57 and 58, the 58 being the revolver designed for law enforcement use. The Model 57 was a more deluxe model with adjustable sights and multiple barrel lengths and its primary intended purpose was hunting. The new cartridge failed in the LE area simply because it was too powerful. Keith originally requested a load with a 170 grain bullet at about 900 fps; Remington® produced a 170 grain load at around 1500 fps. At the time, the .38 Special was the king of LE cartridges and the overly powerful .41 Mag was just too much for most departments, thus the LE commercial market never materialized. Unfortunately the .41 Mag also suffered in the marketplace as most handgunners who wanted a magnum handgun already owned either .357 mags or the powerful .44 Magnum. Thus the .41 Magnum chambering became somewhat of a specialty “niche” for a cadre of dedicated handgunners. 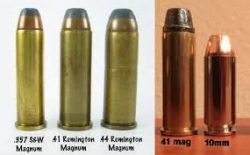 Besides S&W’s Model 57 and 58 revolvers, The .41 Mag has been chambered in many different models by several manufacturers including for a time, the great Desert Eagle™ semi-auto. Today, S&W® offers the Model 57 Classic in .41 Mag. Taurus™ has the 2.5 barreled Model 415 available, but it is Ruger® that has several very practical models for those who wish to own a great hunting handgun. Ruger’s® lineup includes a single action Blackhawk®, as well as several double action models

in both the Redhawk® and Super Redhawk® lines. If you are looking for a long gun, look no further than the Henry Repeating Arms® very classy Big Boy Riflein .41 Mag.

From a ballistic standpoint the .41 Mag is quite impressive. Federal®, Remington®, Winchester®, Barnes®, HSM®, and the heavy hitting Buffalo Bore® ammo are just some of the fodder available for every possible .41 Magnum use. I’ve included some results from an American Rifleman™ test.

There are bullet weights and loads that rival the venerable .44 Remington® cartridge. Some advantages the .41 has over the .44 are flatter trajectories, higher downrange velocity, and some believe that the slightly smaller bore allows for greater penetration; I’d like to see some more gelatin tests that might better define the penetration claim. And the .41 does all this with less recoil than the .44 Mag. 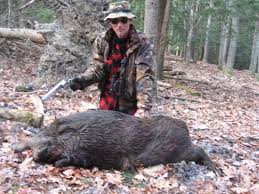 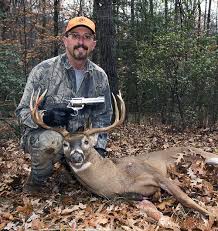 I was first introduced to the .41 Mag about 40 years ago. A friend let me shoot his Blackhawk™ and I was immediately hooked on the thunder and power of the .41. Sadly, a .41 Mag pistol is still on my bucket list. Finding a pristine Desert Eagle™ might be a bit of a stretch, but happily Ruger still makes a Super Redhawk™ with a 7.5 inch barrel chambered in .41 Mag. Christmas isn’t that far off; REALLY SANTA, I’ve been a very good boy!