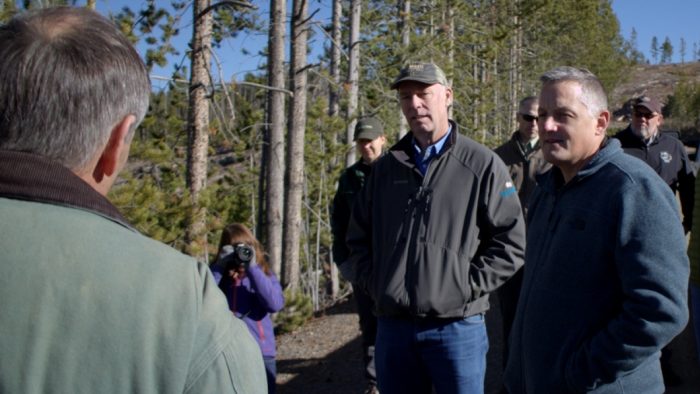 Greg Gianforte to be on the MT Outdoor Radio Show TOMORROW!
By angelamontana

This Saturday U.S. Congressmen Greg Gianforte of Montana  and Bruce Westerman of Arkansas will be on The Montana Outdoor Radio Show!

Gianforte (MT), Westerman (AR) and the MORS crew will be talking about the Resilient Federal Forests Act of 2017. This is a bill that just passed the U.S. House of Representatives last night and now goes to the U.S. Senate. If it becomes law, it would cut out the ability for special interest groups to be able to sue to stop logging projects designed to remove timber that presents a fire hazard in our forests, i.e. beetle kill, fire kill and overgrowth. This would draftily reduce forest fires in Montana and other states. It would be great to get behind this bill so it can eventually become a law.

Here is the press release with more information on the legislation that “provides for comprehensive forest management reform”:

“The Resilient Federal Forests Act provides common sense reforms that will benefit Montana’s forests, economy, and environment. Meaningful forest management will improve the health of our forests, boost wildlife habitats, create good-paying Montana jobs, and reduce the severity of our wildfires,” Congressman Gianforte said. “The amount of public support for more active forest management has been tremendous. Conservation organizations, foresters, stakeholders, and local leaders throughout Montana recognize the need for better forest management, and I commend them for taking steps to help ensure we start managing our forests again. I will continue to advocate for healthier forests in Montana and throughout the West. I encourage the Senate to act quickly on this bill to provide Montanans with relief and a long-term solution to address catastrophic wildfires.”

Chairman Rob Bishop (R, Utah) of the House Committee on Natural Resources said, “Since joining the Committee, Rep. Gianforte has worked tirelessly to urge action on reforms to improve forest health and reduce fire severity. I thank him for his work to elevate and advance the objectives enshrined in this bill to promote greater collaboration at all levels and empower scientifically-backed forest management. Through the advocacy of Gianforte and others, we have a chance to get these important reforms signed into law and protect communities of Montana and across the West from this growing threat.”

Congressman Bruce Westerman (R, Ark.), a trained forester who participated in forest management reform discussions in Montana, introduced the legislation. He said, “This year has proven to be another catastrophic year for wildfires. Dozens of lives have been lost, thousands of homes destroyed, and millions of acres burned. Congress spoke today and said enough is
enough. We must do what is right for our environment and stop these catastrophic wildfires. I thank Speaker Ryan, Leader McCarthy, and Chairman Bishop for their leadership on this issue and I thank my co-sponsors on both sides of the aisle.”

The Resilient Federal Forests Act of 2017 reforms how our forests are managed by streamlining the environmental reviews of projects to remove dead trees to pay for reforestation after large wildfires, utilizing tools to mitigate insect and disease infestation, and improving the health of forests and grasslands to reduce the threat of severe wildfires. The legislation rewards
collaboration among stakeholders and encourages all parties to come to the table early by providing a new arbitration pilot project to prevent frivolous, obstructionist lawsuits. The measure also permanently ends the problem of “fire borrowing” in which federal agencies borrow from other accounts after depleting their firefighting budgets. The current practice reduces funds that should go to preventing catastrophic wildfires.

Throughout the 2017 fire season, Gianforte toured five fires (https://gianforte.house.gov/media-center/press-releases/gianforte-wraps-listening-tour-montana-s-56-counties) and received briefings from incident commanders, and Gianforte met with local officials, key conservation groups, and other stakeholders to work on solutions for healthier forests.
Serving as a strong voice for Montana in Washington, Gianforte drew Washington’s attentions to wildfires in Montana. Gianforte also helped secure $576.5 million in wildfire disaster relief (https://gianforte.house.gov/media-center/press-releases/gianforte-secures-wildfire-disaster-aid-montana). House Speaker Paul D. Ryan praised Gianforte for his successful efforts: “Greg has been a strong advocate for wildfire resources for Montana in the midst of this devastating fire season. He was a leader from the West who helped make sure needed funds were provided for in this package.”  Gianforte spoke on the House floor today (https://youtu.be/YOXm-Wmu9HM) in support of the legislation.

The measure moves to the Senate for consideration and action.
###

Congressmen Greg Gianforte invited Congressman Bruce Westerman (R, Ark.), a trained forester and sponsor of the Resilient Federal Forests Act of 2017, to meet with Montanans impacted by severe wildfires and a lack of meaningful forest management. The two spoke with sawmill workers, toured a restoration project, met with Forest Service leaders, and spoke at a roundtable discussion in which eight different organizations were represented.

The U.S. House of Representatives voted to include $576.5 million for wildfire recovery and suppression in a natural disaster aid bill. House Speaker Paul Ryan credited Gianforte for his work in securing the wildfire relief funding, saying, “Greg has been a strong advocate for wildfire resources for Montana in the midst of this devastating fire season. He was a leader from the West who helped make sure needed funds were provided for in this package.”

Congressman Gianforte welcomed Ravalli County Commissioner Greg Chilcott to a congressional hearing to advocate for forest management reform. Chilcott provided insight about the challenges Montana’s local officials face with wildfires. “Our once-vibrant timber has been left in shambles, our infrastructure decimated, and our scenic beauty scarred for decades to come. These trends will continue unless Congress acts,” Chilcott said.

September 26 – Gianforte to Washington: “We Need to Start Managing Our Forests Again”

In mid-September, Gianforte conducted a Forest Jobs Tour
(http://www.dailyinterlake.com/article/20170922/ARTICLE/170929950) in Montana where he visited with key stakeholders affected by forest management changes. In Washington, he continued to provide strong leadership in helping shepherd wildfire relief through a major House disaster aid bill.

Beginning with the July Fire near Zortman, Congressman Gianforte met with incident commanders at five fires throughout the fire season and toured all 56 Montana counties (https://gianforte.house.gov/media-center/press-releases/gianforte-wraps-listening-tour-montana-s-56-counties). He brought those experiences and discussions to the House floor, alerting his colleagues about what Montanans faced. Pointing to an image of a wildfire approaching Lolo, Gianforte said, “I hope this image and the others from back home will make my colleagues more aware of the fires’ devastation and the need for relief in the Treasure State.”

July 8 – Gianforte visits the July fire in Zortman, the first in what would be tours of five fire sites

(https://gianforte.house.gov/media-center/press-releases/gianforte-wraps-listening-tour-montana-s-56-counties), including the Lodgepole Complex fires, the Bruner Mountain fire, the Park Creek fire, and the Lolo Peak fire.

What They Are Saying About the Resilient Federal Forests Act

David Allen, President & CEO of the Rocky Mountain Elk Foundation: “The Rocky Mountain Elk Foundation stands in support of the Resilient Federal Forests Act of 2017. This comprehensive legislation would expedite forest management activities on public lands, discourage litigation that has needlessly stopped necessary forest management projects and put an end to the practice of borrowing from agency budgets to pay for wildfire suppression. We recognize Congressman Westerman for taking the lead on this important issue and Congressman Gianforte for signing on as a cosponsor and for bringing sportsmen and industry folks together to talk about the bill. Active forest management, including well-planned logging, prescribed burning, weed treatments and grazing improves forest health, creates landscape diversity, and improves forage for elk and other
wildlife.”

Ravalli County Commissioner Greg Chilcott: “Ravalli County and the Montana Coalition of Forest Counties thank Congressmen Westerman and Gianforte for their leadership and support congressional efforts to provide our professional land managers the opportunity get back to actively managing our public lands. The process has been brought to a halt by delays caused by
endless analysis, litigation and funding shortfalls created by fire suppression costs. The Resilient Federal Forests Acts of 2017 provides the boots on the ground necessary to enhance forest health, improve wildlife habitat, increase forest revenues, reduce the risk of catastrophic wildfire and provide for the health and safety of the citizens living in our communities.”

Tony Colter, vice president of the board and plant manager at Sun Mountain Lumber: “Sun Mountain employs 175 right now in logging and the mill. If we had access to more logs, we would like to get back to two shifts which would employ another 25-30. The Westerman bill is essential to avoid losing even more jobs in our community and across rural Montana.”

Julia Altemus, executive director for the Montana Wood Products Association: “Federal forest reform is important to Montana’s timber industry, timber dependent communities and our tourism economy. We appreciate Congressman Gianforte and Congressman Westerman taking the time out of their busy schedules to tour a Montana mill and a collaboratively developed timber sale – unfortunately now in the 9th Circuit – and the very timely discussion regarding how we solve
complex forestry issues in a bipartisan manner.”

Keith Olson, executive director of the Montana Logging Association: “The Resilient Federal Forests Act is so important for Montana forest jobs and our rural way of life. Lawsuits are killing small-town Montana. This bill’s our lifeline. Greg and Bruce Westerman are champions for common sense forest reform. We need them to push this bill across the finish line.”

Tony Schoonen, chief of staff for the Boone and Crockett Club: “A confluence of factors is driving record-setting wildfire seasons, including hotter and drier conditions, longer duration fire seasons, lack of consistent active management of our national forests, litigation and inadequate funding levels for the U.S. Forest Service’s forest health and restoration accounts. The Boone and Crockett Club believes we need to take steps immediately to address these critical issues and appreciate the efforts of Congressman Gianforte and Congressman Westerman to bring Congress together in the coming weeks to adopt the sensible and well-vetted provisions in H.R. 2936 that will enhance the health of our national forests.”

This will affect all of us sportsmen a great deal, as it deals with the forests they hunt and trap in and rivers and lakes we all fish in. As we all know, the fires this last summer created a lot of problems for sportsman, i.e. Seeley Lake closing, most of the campgrounds in Montana were closed at one point or the other and bow hunting areas got closed and much, much more. If this bill passes, it could be a huge step forward to stopping those kinds of things from ever happening again.

TUNE IN TOMORROW MORNING FROM 6AM – 8AM FOR A SHOW YOU DON’T WANT TO MISS!