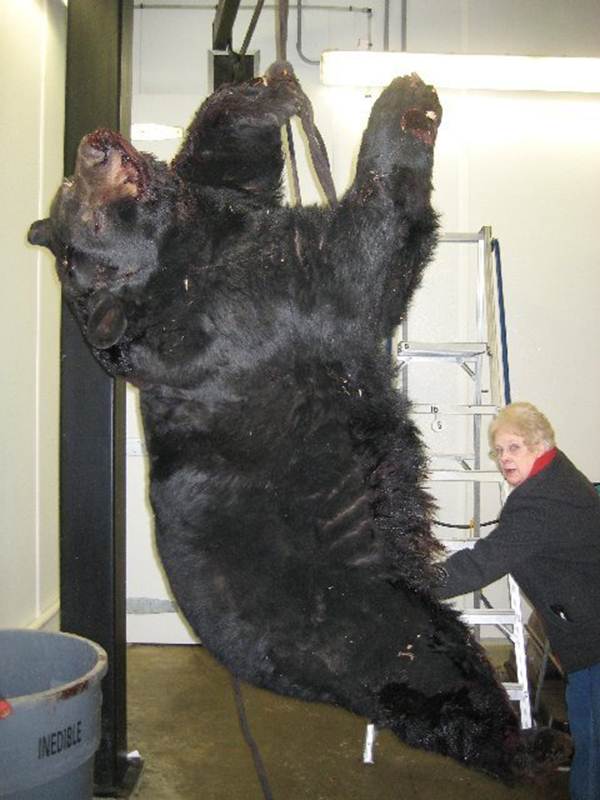 Here’s a story about a bear from 2012 that was posted on OyiaBrown.com in 2013 that could really happen anywhere there are bears, but this incident happened in Chippewa County, Wisconsin.  If you’re a rancher and/or a farmer, be prepared for anything…even another Hercules!

A huge hibernating male black bear was killed Nov. 2nd in southern Chippewa County when it was hit by a combine.

Neil Schlough of Brimley was harvesting corn in a field on the Pinehurst Farm at about 7 o’clock that evening a few miles north of the Mackinac county line, just off of South Maple Road , or about 5 miles north of Kinross.

The bear was apparently “denning” in the field and dug itself a hole to sleep the cold months away in and pulled corn stalks over itself to cover up.

According to his wife, Phyllis, Neil came upon the bear with the outside row of his combine head and drove the outside snout into the animal’s neck and shoulder and pushed it about six or seven feet.

She said Neil felt the combine strike something and the outside snout was pushed up into the air (the combine wasn’t damaged).

“He stepped out of the combine and saw that he had hit an animal,” she said. “At first he thought one of our dairy steers over there had gotten out, went in the corn field, ate too much corn and died.”

It didn’t take long for Neil to realize the animal was a bear–he just had no idea how big it was.  Neil had told his wife he thought it weighed 300 pounds.  He was definitely off with that number.

After they called the DNR, a skid steer was taken to the field to lift up the bear so it could be dressed.

The bear was taken to the Soo Locker Plant to be prepared for mounting. It was there that the animal was first weighed and measured.

Field dressed, the bear weighed in at 618 pounds and measured 7 feet from head to tail.

The Schloughs were told at the locker that they could add 80 to 100 pounds, depending on the size animal, to reach an approximate actual weight.

With that being said, the bear was originally estimated to weigh around 700 to 720 pounds.  In order to tell if the bear’s size would break any records, the skull has to be dried for 60 days to be scored, but they think it might break the Chippewa County record.

More common DNR wildlife specialist Jess Carstens said, “This is a thing that, for whatever reason, is happening quite regularly that [bears] are denning up in the middle of fields ­ and corn fields seem to be particularly common due to the amount of debris from harvesting the corn that’s on the ground. There’s a little more stuff to pull in on top of them as they snuggle into the hold that they’ve dug.”

Neil paid $75 to keep the bear and is getting a full-body mount of it, done by Tom Persons, owner of TP Taxidermy, as he doesn’t have much time to hunt or fish because of farming. Persons told the Schloughs that he will have to use a grizzly bear form to mount the bear, as he doesn’t have any black bear mounts big enough!  Persons also believes the bear is 15-20 years-old, but that will be verified when they analyze one of the bear’s teeth.

After thinking of the perfect name for this bear, Neil decided on a fitting name:

“I thought this was kind of funny. He said, ‘I’m going to name that thing Hercules.’ … I thought Hercules for that bear was a good name.”