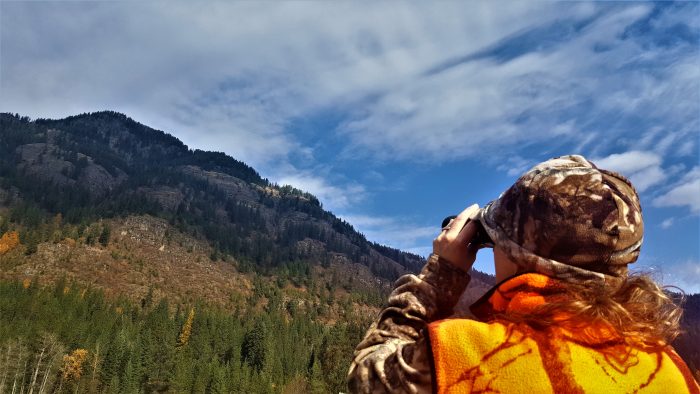 Hunting Rocky Mountain Bighorn sheep can be a daunting task especially in rugged mountain regions like the Cabinet Mountain Wilderness. But that didn’t stop Katie King from trying it on a recent DIY solo hunt.

Several trips to the Cabinets came up empty.  In fact Katie never saw a bighorn sheep in her hunting unit until October 29th and season opened in September.  That isn’t unusual for the unit she drew and she knew that eventually the sheep would move from the high mountainous back country into areas that are reachable as soon as the weather got them moving.

Katie is a working Mom and had to balance her time between family and work which meant bringing her young son along on a few scouting days (her husband was there for those days too).  Having a permit like the one she had put a lot of pressure on her but she felt relieved when she first spotted a herd of sheep working their way across the face of a mountain side on a sunny October day. 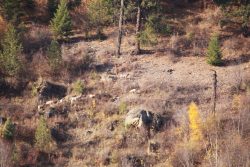 A closer look revealed a solid ram in the group and her relief turned to excitement in an instant. She planned her route up the mountain knowing that it would take several hours to accomplish the task of getting into position.

After hiking straight up over loose rocks and tangled brush a gun shot echoed from above her.  The big ram she spotted earlier in the day had just been shot by another hunter who made his way around and above her with his friend. Neither hunter knew the other was pursuing the same ram but her heart sunk for a moment before turning to hike off the mountain.

“I was disappointed at first and just kind of stomping down the mountain for a while.  Then I decided that I better slow down and look around. A couple minutes later, there he was!” Katie said. It was a moment that she will never forget, a ram with nine ewes stood on a rock at 208 yards below her.

She looked at his horns and decided that he was a ram she would be proud of.  “I had to calm myself down to get ready for the shot.  The mountain was really steep and there wasn’t much to steady myself on.” Katie recalled attempting an off hand shot at first but when she couldn’t get steady she had to move several yards until she was able to press her shoulder into something solid. 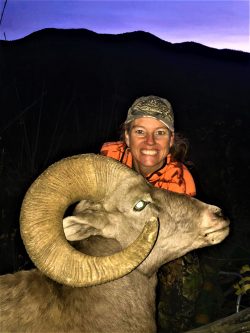 Placing the cross hairs on the ram’s back and slowly lowering them until they were squarely on the vitals helped steady her aim under the difficult shooting scenario.  The first shot rang across the canyon and she saw the ram stiffen.  “I knew I had hit him good as soon as I pulled the trigger but I wasn’t messing around” King said.  She worked the bolt on her 7mm-08 Savage and sent another one into the vitals.  The ram rolled off the rock and tumbled for  several hundred feet before coming to a stop.

“It took me a while to find it and I knew it was going to get dark soon.” Panic began to set it but Kate had to once again settle her nerves.  “I was like, okay I know the ram is dead I’ve just got to relax here.”  King recalls the moment when she found him.  “I looked right at him but was like, no that’s just a rock. Then I realized it was him and I was like Yes!”

Because she found the sheep on her way down the mountain and it rolled so far her husband and son Kaden were able to hike up to her from a forest service road below.  “I was so glad when I heard you yell up to me, I had just found the ram about five minutes before that.” She said when I got to her and her first bighorn ram.  I had to carry our son Kaden through a few rough patches of brush but even at 6 years old he showed me how to climb uphill for 20 minutes without stopping. 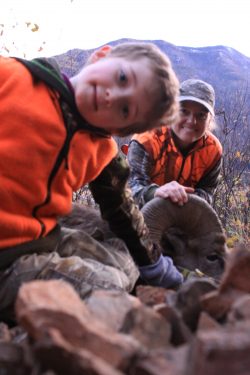 As my wife, son and I said a prayer of thanks and cut meat on a tricky mountain slope the stars filled the sky.  The darkness of night surrounded us and the moon lit our way to our waiting truck. The excitement in Kate’s voice as she retold the story brought a smile to my face.  Kate had accomplished something that hunters around the world can only dream about – that I can only dream about, and she did it all on her own.

“How many women can say that they have hunted a public land bighorn sheep on their own successfully?”  I thought.

Then I thought, how many husbands have a wife like mine? That was a better question and for me the simplest question to answer: none.

Congratulations to my wife Kate, the hardest hunting woman I know.

(Caution: The authors wife is unique and should not be used as a measurement by which to assess potential female life partners.  But if you do find one marry her and you will never be without fresh venison again)