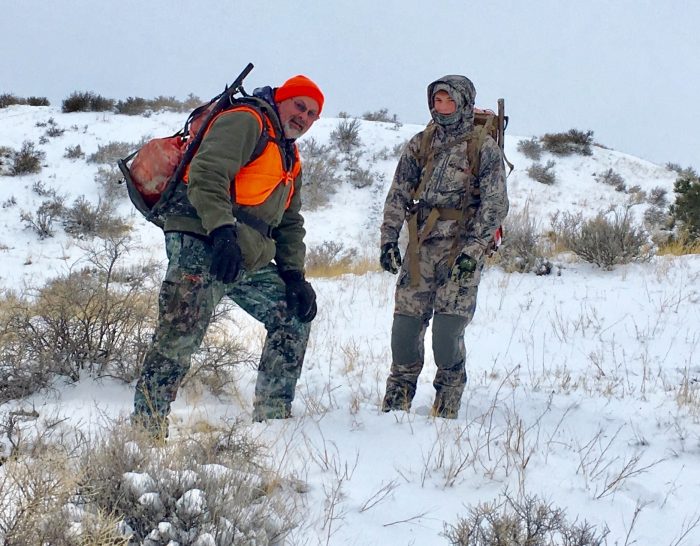 The Cow tag that turned into a New Years Resolution! (by the Captain)
By angelamontana 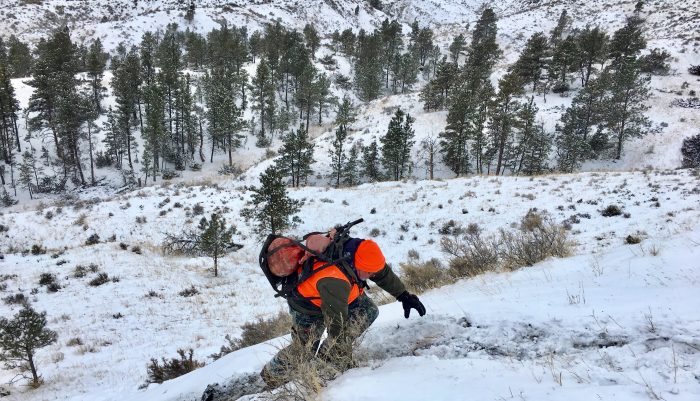 (photo of a fat, out-of-shape hunter-i.e. the Captain)

Last year after putting on a few miles walking as I searched for an elk to harvest during the general hunting season I was in fairly good shape. Those miles walking however didn’t produce an elk, but then came the shoulder season. I filled my A tag and punched my 699 cow tag before the middle of December. On both of those hunts I was able to load the cow elk whole into the back of my pickup. There wasn’t a whole lot of walking involved.

This past general hunting season I had limited days in the field because of other work related responsibilities. I certainly could of went hunting more but in the back of my mind I was thinking that it would be like a year ago when I got both of my elk in December during the shoulder season. Well I am happy to report I punched my 699 cow elk tag last Thursday. The only difference from last December the pickup was 2 miles away.

The hunting opportunity began when my good friend Kelly Burke from Burke Ranch Outfitters from Glasgow called and suggested that we hunt on Thursday before Christmas because of the cold weather and snow that was expected to hit the area. The roads traveling on Wednesday were for the most part like an ice skating rink so it was a slow and cautious 9 hour drive from Missoula to Malta where Kelly and I would meet up that next morning. I actually saw a DOT snow plow on its side in the ditch during my travels, fortunately the driver was not injured.

Thursday morning Kelly and I drove around in my pickup looking for elk. We spotted some nice bulls but no cows. We then cut some elk tracks one of the back roads we were hunting in the middle of the afternoon. “This is our opportunity grab your pack, I think these elk are close”, he said after he examined the fresh tracks that crossed the road.

My definition of “close by” is evidently quite different than Kelly’s. I was thinking a few hundred yards. A little over 2 miles away Kelly spotted a cow elk between two spike elk. By that time I was laboring and could only walk about 10 yards at a time as we headed up to the ridge where the elk were feeding. My legs were fatigued. I was out of shape. The cow elk was 241 yards away. After I pulled the trigger and it dropped the only thing that went through my mind was, “now we have to pack it out” and the way my body felt was Kelly might have to pack me out too!

Kelly suggested that he pack a hind quarter out and that we hang the rest of the quartered elk in a nearby tree. He said that Nik, his 14 year old son, would relish the opportunity to come out the next morning and help us pack the rest of the elk out with pack frames. As we headed back to the truck in the dark with our headlamps the temperature was in single digits. I thought to myself,” snow, cold, this is the way elk hunting should be but I didn’t prepare my body so I could really enjoy it” I also thought what a great friend Kelly was as he hauled out part of my elk that night.

In the hotel room as I attempted to rest my exhausted body with a good night’s sleep I couldn’t because for the first time in my life I suffered from leg cramps. In between cramps I googled leg cramps to find out why I was having them and this is what I found out from Medical News Today, “Exercise is one factor. Stressing or using a muscle for a long time may trigger a leg cramp during or after the exertion. Cramps often affect athletes, especially at the start of a season, if the body is out of condition”.

Bingo, not that I consider myself an athlete but I was definitely out of condition. I also didn’t drink enough water either.

The next morning I chugged down a couple bottles of Gatorade, drank more water. The added fluid intake helped and with a whole lot of help from Kelly and his son Nik we packed the rest of the elk out. I owe them big time, that’s for sure.

After that hunting trip I also have another item to add to my hunting checklist- Make sure my body is prepared to enjoy a true Montana elk hunting experience.

(written by the Captain; feature photo of The Captain and Nik Burke)