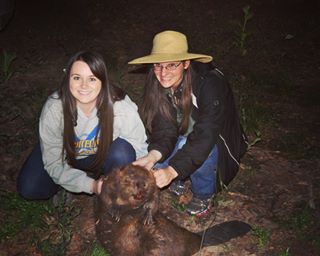 When a beaver is a fish???
By Moosetrack Megan In today’s scientific era, it’s easy to look at a beaver and tell it’s a mammal, but back before such things were common knowledge, and Wikipedia was around to quickly school anyone who had any doubts about it, the taxonomy of the beaver was somewhat ambiguous.

That’s because in the 17th century, the Bishop of Quebec asked his superiors back in France if beaver meat could be classified as fish during Lent.

During the Catholic holiday, devout followers often don’t eat meat on Fridays. In Corinthians, different types of meat are broken down for us: ”

“All flesh is not the same flesh: but there is one kind of flesh of men, another flesh of beasts, another of fishes, and another of birds.”

In the early days of the fur trade its estimated that there were 60 to 400 million beavers floating around in North America (don’t even get me started on wondering why that’s such a huge gap of an estimate).

They were pretty readily available for eating and the church ok’d it.

If the thought of chowing down on a beaver seems weird to you, it could be weirder: In South America, the church has OK’d eating caphybara, or the world’s largest rodent during Lent.

In Louisiana, alligator has been approved as a meat alternative for the holiday.

Well, in 2002 when the state tried to restrict the sale of muskrats (also Ok’d by the church), a legislator said there was hell to pay when regulation of muskrat meat was proposed:

“I’ve never seen so many people upset about an issue,” said a state representative to the New York Times. “We had almost 500 people at the courthouse for hearings on muskrat legislation.”