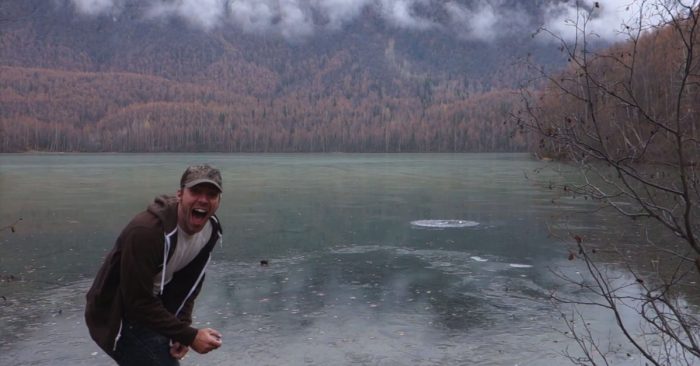 Coolest Sound Ever? Maybe….
By angelamontana

Here is a guy that he grew up in California–where they don’t have much ice–and he ended up moving to Alaska.  (There’s a 16 minute version of this video you can watch here)  He hears the sound of skipping a rock on ice for the first time, and his reaction is pretty funny.  Watch the short video below, and see it explained below.

The guy is a YouTube filmmaker named Cory “Mr. Safety” Williams, aka DudeLikeHELLA, according to the Huffington Post.  He and his girlfriend were checking out the outskirts of Anchorage, and, as you can see, Williams was blown away by the UFO-like sounds the rock made while skipping across the ice.

He exclaimed that was the coolest sound he had ever heard.  A magazine called Cottage Life, from Canada, explained the cause of the noise:

“chirping and pinging” sounds made when rocks are thrown onto bodies of frozen water are caused by the vibration of the ice.

“They’re different from the noises you’d generate by whipping rocks at, say, dirt, because underneath the ice the water isn’t solid,” the magazine writes. “Ice vibrates up and down, similar to a drumhead or cymbal vibrating after being struck.”

There you have it–something else to do outdoors.