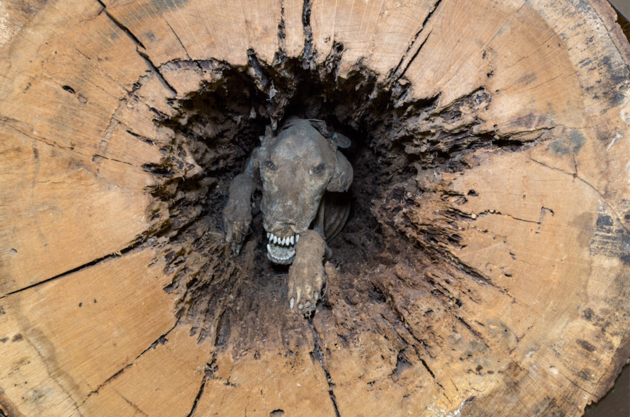 Loggers from the 80s Discovered Mummified Dog in Tree
By angelamontana

What is the strangest thing you have ever come across while out in the mountains?  Have you ever discovered a mummified dog in a log?

Something a bit different, stumbled across this and thought Id share!

So the story goes, in 1980 a “logger” found the dog whilst working in America. Saw the dog after processing the log and donated it to a museum.

The dog is a hunting type dog and around 4 years old. Apparently was in there for around 20 years. Scientists believe his fate was sealed when he chased something up into the tree.

The plinth next to Stuckie in the museum gives an explanation on how the mummification happened – “A chimney effect occurred in the hollow tree, resulting in an upward draft of air. This caused the scent of the dead animal to be carried away, which otherwise would have attracted insects and other organisms that feed on dead animals. The hollow tree also provided relatively dry conditions, and the tannic acid of the oak helped harden the animal’s skin.”

Imagine losing your dog in the 60’s and finding it in a log 20 years later!

The actual story of the dog, according to MummyTombs.com is that the dog was found in Waycross, Georgia.  The dog was alive in the 60s and must have run away from its owner and chased a critter into a hollow log, which would explain why the dog was in there.  The dog ended up doing itself a disservice by wedging itself so tightly in the log, it couldn’t move and died.

In the 80s, loggers were in the area, and they actually cut down the tree and loaded it onto their truck.  When they realized what they had, they sent the dog and the tree to the Southern Forest World Museum in Waycross, Georgia–where you can find the dog today.