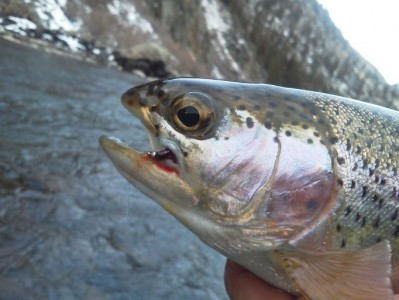 Linda   reports,” We had  fishermen come  in this past  week.  We have plowed the road and if the wind does not get too bad the snow   will not drift.    Some of the guys made a path.  Those guys were able to fish at or near Little Bug. They did catch pike on smelt and minnows.  Some were able to fish going  north on the west shore.   They did catch some fish .  The ice is  18 inches thick.”

Raymond   said,” Not many  people out fishing this week.  The few   fishermen  caught a  few crappies and perch. The roads  in the park are icy but over all good and there are no problems getting in.     Most guys were catching with minnows from the Marina.  We have 10 to 12 inches of ice.  “

Wade reports,” over the weekend there wasn’t a lot of people here.  Some guys were struggling.   There was one guy who was there for 3 days and got his limit fishing in the bay all three days.  He was fun to watch.  He was having a heck of a good time.  He was fishing at 35 feet using a glow in the dark spoon and with my small fathead minnows.  He said the smaller work better.  The roads are good around here.“

Lane says,” it has been slow fishing this week.  I believe it is the cold.  The northern pike have picked up.  They are finding them at 10 to 15 feet depths so they are coming up.  The walleye bite is better. It seems to be more consistent.  Mostly eaters  with a few bigger.

The ice  in some   places is shallow starting at 14 feet  but going to 2 foot elsewhere.  Fishermen are  using 4 wheelers and side-by-sides.   We have several pressure ridges so check with us for details.  There are two in the bay and two out on the main.  The road  is good  Clint plows the road as needed.  It has been plowed”

Taylor   says, “fishing  has slowed down some. We have  had a lot of weather fronts so that slows things down.     The lake trout had  just  started to bite.  People need to know there is 4 to 6 inches of snow on the ice.  Some had caught northern pike and walleye.  We just have not had great reports of catching. ”

Marina reports,” We had lots of drifting this week.  I have been plowing.  I have seen a few people about 4 on the ice this week.  those few people said it was slow fishing.  I have closed Cottonwood and Overlook going north is also closed.  You can fish at Red Lodge Campground, Fisherman Point and Marshal Cove or on the shore by the boat ramp.  I got help getting the deep plowing done so now I can maintain it better with my plowing.  There is  12 inches  of ice at the Red Lodge campground area.  Right now  at Fisherman Point there  is 14 inches at the shore line and 8 inches in the middle.  “

“ Right now there are a bunch of shacks out there.  Elmo still   has good ice.  They have catching lots of   perch. They are catching mostly small ones a little above the bottom in the deeper part of the lake.  Guys have been using everything from corn to cut worms and crawlers.  The recent cold weather  has made 8 to 12 inches of ice  but you will be shoveling  snow off of it. You need to come see the snowman  someone built out in the middle.    It is walk on only of course ”, Bob says.

Pat said,” We have  had a couple of  ice fishermen at Deadman’s this week.  They did plow the road but with wind like today drifting becomes a problem.  So if they come watch the weather closely. “There are  shacks  on Broadview pond.  So  we think people  seem to be catching fish.”

Terry says,” not many out fishing.  We  have been having  trouble just getting  around.  They were snagging   some Kokanee at 5 to 6   feet  at Deadmans . ”

Rick says, “ It was  fair fishing this week .  I would say it was slower.   Everybody caught something it was a lot of time between bite.  You can get into bair just make sure to  be prepared with chains because of the patches of ice on the road.  There   is 14 to 16 inches of ice all over on Bair. Rumor has it that some were catching ling.  Getting in can be touch and go.  On Sutherland it is tougher to  get in. be prepared don’t leave home without a shovel and chains.   With  the drifting use snowmobiles to get to the ice. ”

Dale  says, “  We have lots of  snow.  At this point there are not a lot of places you can get to the ice because of snow and road conditions.   You can fish at Achley.  That is really about the only place right now.  They are catching rainbows.  Guys are using a micro jig bite.  You can also fish the East Fork and get some perch.”

Slim says, “ I have had to close the Marina right now.  Getting in on the road is next to impossible  because of the snow.  I have a plow  but the snow is more than it can handle.  I do  not  advise  trying to go in  the road is not passable.  There will be no  services and no one will be  there.   I had the  wounded Warriors there for 5 days  and  it all came to a head when I had no way of getting them out.  The road had drifted closed.   I ended up calling for help and thankfully  after a lot of trying they got them out.  Pay attention  to facebook for any changes.  ”

Sharon says,”  fishing is good  and the ice is good.   The wind has been  an issue.  Guys are catching trout and some walleye.  Today the weather is good.  All in all fishing is good.  The ice is 12 to 15 inches. There are still pressure ridges so check at the marina for details. “

Jim says,”  It was 33below this morning.  It is just too cold to fish.  We decided to cancel the kids fishing day.  The kids should be having fun not fighting the cold.   So not much fishing going on. I  hear Forchette is blown in.   So do some tying  or making lures and come to the shop for supplies. “

Matt says,” I was at Crooked Creek when the Wounded Warriors were there  this week.  It got tougher to get out because of the weather.  I went in on a snow mobile and I would not recommend going in right now.  Slim closed the Marina.

I have not heard anything else.  People are laying low because it was so cold and staying home. ”

Rich says, “  The river is full of ice it probably will get worse with the forecast.

I talked to some guys who said they still are doing  good on perch and  trout at Canyon Ferry.  They were catching them by the Silos.  I have talked to a few doing well on walleye.  They were going 35 feet or less in depths.

Holter- The perch are still biting.  The ice is getting bad I am hearing.  In some places because of the warming weather it is only 8 inches they tell me.  I also heard three 4 wheelers went through the ice.   They are finding fish at 25 to 60 feet down. ”

“ It is tough to access anywhere right now.  There is a lot of ice. Right now we are looking at ice building up that could lead to jams. The rivers are  not safe.  There is lots of shelf ice.  You just cannot safely get close ,” Chris says.

Beau says, “It is too dang cold to be out there fishing right now. I have heard  the water is much clearer.  They bumped the cfs up on the Big Horn. ”

Stephanie  says,” we are just not seeing  many fishermen.  It just has been  too cold. The cfs is up to 4500.  There has just been not much for traffic out there on the water.  The tough guys who have gone out had some good luck fishing.   The wind has been blowing a lot this week. They are seeing  a baetes hatch.  Use a dry size 20.   Streamer fishing is still the way to go.  For  streamers  use dirty hippies. Try a thin mint or a vanilla wafer.”

Alice says, “ A few midges  are around for the occasional fish looking up. Although most fish are eating nymphs, small olive mayfly nymphs and smallish midge patterns should  work well. If you want to throw streamers, go big and olive.  Rainbows will be spawning soon, so be on the look out for redds.”