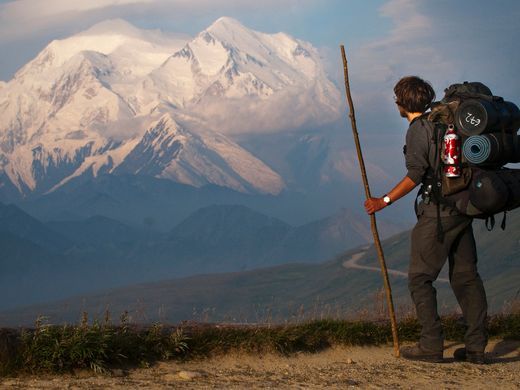 If hiking is your thing, and traveling the continent to do that is what you do, take note of this.  A recent article from Live Science gives a heads up to hikers that want to conquer the summit of North America’s tallest land-based mountain, not located in Montana but located in Alaska and standing 20,000 feet above sea level, have to pack their crap to either one location on the mountain or one location 100 miles away.

According to a new set of waste-management regulations proposed this year, climbers who want to reach the summit of Alaska’s Denali National Park and Preserve may dispose of their poop in just one location on the mountain and one location about 100 miles (160 kilometers) away, the Associated Press reported. The proposed rule changes were motivated by more than a decade of research conducted by National Park Service (NPS) researchers who found that glacial melt on the mountain is getting close to contaminating nearby water sources with distressing amounts of human fecal bacteria.

Apparently, “more than 1,000 climbers visit every year, and according to Michael Loso, a glacier geologist at the NPS, these intrepid visitors leave behind more than 4,400 lbs. (2 metric tons) of human waste every year.”  So, yeah…there’s a problem.

Apparently, park officials have known about this for a while, as back in 2007, “new NPS regulations asked each climber trekking above the mountain’s 14,200-foot (4,300 m) Camp Four to capture their waste in a Clean Mountain Can, a 1.88-gallon polyethylene container designed to hold 10 to 14 bowel movements.”  Climbers were encouraged to dump the feces from the Clean Mountain Cans into large crevasses, as it was thought the fecal matter would freeze and decompose–only that wasn’t happening at all.  Officials fear that this waste could reach the watershed in Alaska.

Indeed, Loso and his colleagues found trace amounts of fecal bacteria in Kahiltna River during water tests conducted in 2011 and 2012. According to the NPS, the contamination was very small and still within Alaska’s state water-quality standards. Regardless, Loso’s findings motivated park officials to revise their waste-management rules.

In case you didn’t know.