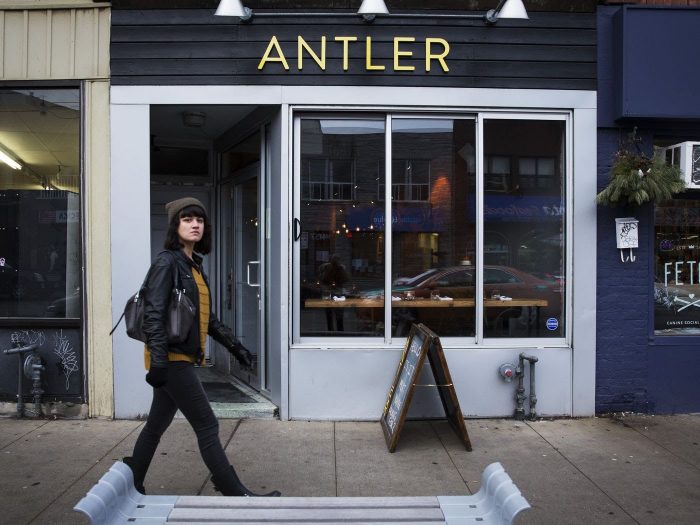 After weeks of vegan activists protesting in front of his nose-to-tail bistro, chef Michael Hunter decided to make a statement by butchering a freshly-killed deer’s leg in the window of his Toronto restaurant, Antler Kitchen & Bar, right in front of the demonstrators. “I figured, I’ll show them,” Hunter tells writer Corey Mintz. “I’m going to have my own protest.”

According to Eater.com, a local vegan dog walker became outraged and put together a protest and stood outside the Antler restaurant with signs after “venison is the new kale” was written on the restaurant’s chalk board out front.  Chef Hunter took matters into his own hands…

As the winter dragged on, Hunter worried that the protests were turning customers away his restaurant. “I just felt helpless,” he explains. “It’s hurting our business. I hoped it would fizzle out and go away.” Last Friday, when the protesters started shouting “murderer” whenever the door to the restaurant opened, Hunter decided he needed to push back in some way. That’s when he got the idea to bring the deer leg to the window and break it down in front of the vegans.

This, to me, is funny. Why not? If you don’t like something a business is doing, don’t go there…stop trying to force everybody else to live the way you live. It is mind-boggling to me how much energy people put into trying to change things because of their own personal “feelings”…just stop, already.