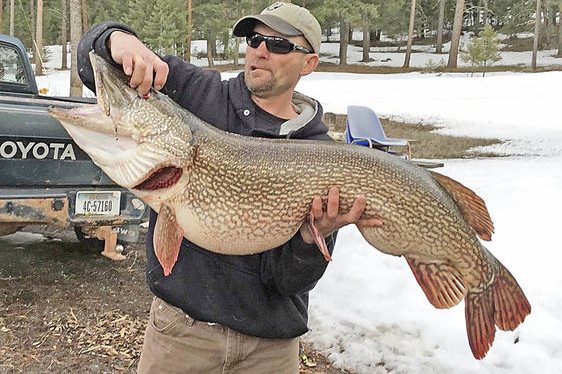 Jimmy Zander of Potomac recently found the “wall hanger” he has been searching for his whole life, according to SeeleyLake.com.   On Monday, March 26th, at an area lake, Zander caught a 47-inch, 33 pound, 8 ounce northern pike.

After Zander first brought in a four-pounder, he noticed his tip-up was really “zinging”, which meant he had a big one.  After a 10-minute fight, he got the monster through the ice hole.  “It wasn’t real easy,” Zander said.  He brought it through the two-feet of ice by laying back and pulling it.

Congratulations to Jimmy Zander on this trophy pike!  Apparently, if it is certified, it could set a record for the local lake in which he caught the giant!