X Marks the Spot: with Colonel Smoothbore
By angelamontana

SigSauer® has been manufacturing firearms since the mid-1800s.  Headquartered in Newington, New Hampshire, the company has recently expanded is product line to include not only very nice handguns, but also rifles, a large line of optics, an ever expanding array of high quality ammunition, suppressors, airguns, apparel, and shooting gear. In fact SigSauer® can provide just about anything firearm related.

I own a Sig 1911. Mine is a full size (5 inch barrel) pistol with fixed sights. It came in a really handy range kit that included a level 2 retention holster, 3 eight round magazines, and a loader all packaged in a roomy hard case. I did replace the front sight with a fiber optic red unit. I’ve owned and used this gun for about 5 years and other than the original recoil spring being a bit weak, it has been all one could ask for in an entry level gun. Like most all Sigs, it is very accurate and the fit and finish is excellent. My only complaint is that Sig 1911s have exterior dimensions a bit larger than the industry standard. Finding a Kydex holster that fits can be a little frustrating, other than that, it is a great pistol. I have even used it in USPSA competitions. 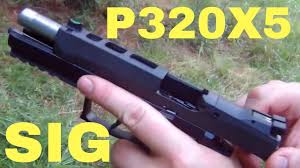 A few years back SigSauer® brought their first striker, polymer framed semi-auto pistol, the P320, to the American market. This is basically the same gun that recently won the contract to provide a new generation of handguns to the U.S. Military. I’m not sure why, but until recently I had not even handled P320 in any of its many forms. That’s changed and I’m really excited about one of the many P320 models.

The P320 X-Five full size is a 5 inch barreled pistol that comes with Dawson Precision® Fiber Optic front and fully-adjustable rear sights, a Nitron finished stainless steel slide with cutouts that lighten it, and four 21 round magazines. The rear sight can be removed and replaced with a Romeo 1® reflex red dot optic. The polymer frame on this model has a higher beavertail and a relief cut under the trigger guard that allows the shooter a grip closer to the bore axis. This enables one better management of recoil resulting in faster recovery times; in other words, one gets the gun back on target more quickly. The pistol had a removable mag funnel that really speeds reloads as well as a removable tungsten weight in the grip that helps balance the bull barrel. 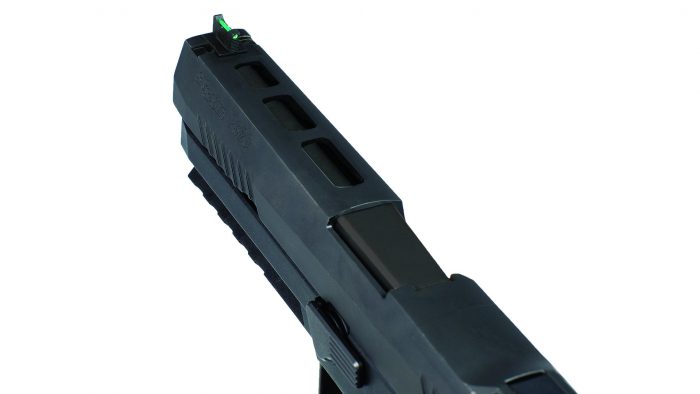 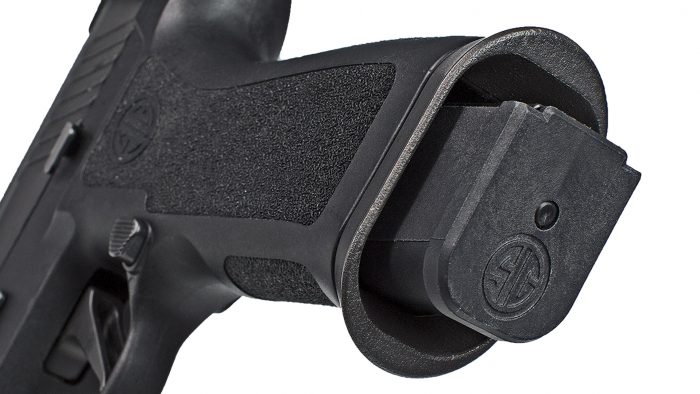 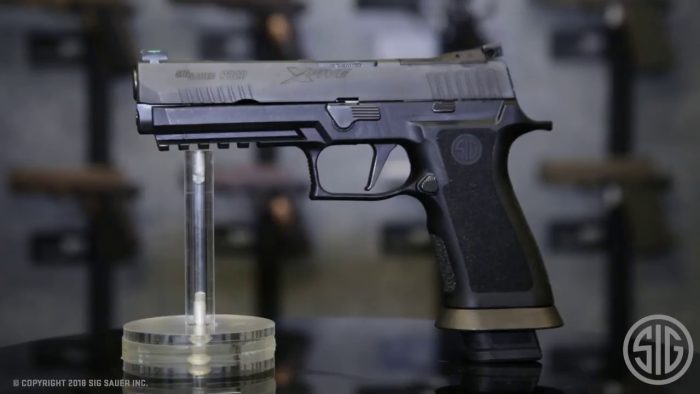 or me the best part of the P320 X-Five is the trigger. I’ve been shooting M&P semis for years, I really like the triggers on these guns, and in fact I own several. But the X-Five trigger is absolutely the best I have ever found on any striker fired, polymer pistol. The X-Five’s trigger is a bit different than the standard P320; it is a straight trigger that breaks at 90 degrees. My first reaction to pressing this trigger was WOW and way COOl!

The P320 X-Five is a versatile pistol that really shines in a couple of ways. It would make a great duty gun, but it use in competition is probably its strong suit. It can be used in several USPSA classes, foremost is carry optics, also production, limited, limited 10, and even the open class. I’m really looking forward to the opportunity to run an X-Five through an extended range test. If it lives up to my positive first impressions, I might have to find a spot in the safe for one.