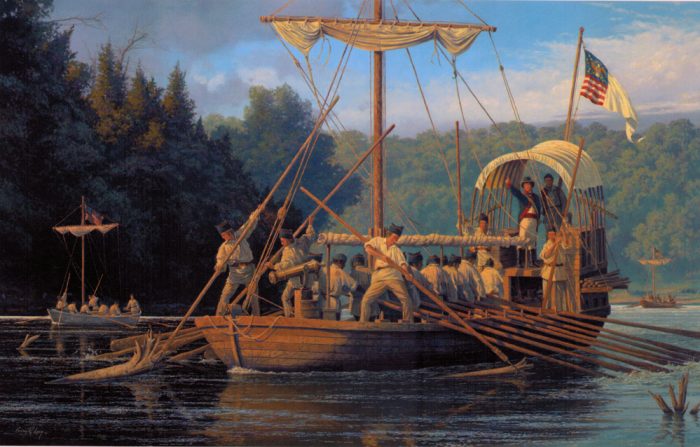 Lewis & Clark Depart St. Louis on this day 214 Years Ago
By angelamontana

Here’s a knowledge nugget–on May 14, 1804, Lewis and Clark departed with approximately 45 men to explore the American interior..

One year after the United States doubled its territory with the Louisiana Purchase, the Lewis and Clark expedition leaves St. Louis, Missouri, on a mission to explore the Northwest from the Mississippi River to the Pacific Ocean.

Even before the U.S. government concluded purchase negotiations with France, President Thomas Jefferson commissioned his private secretary Meriwether Lewis and William Clark, an army captain, to lead an expedition into what is now the U.S. Northwest. On May 14, the “Corps of Discovery”–featuring approximately 45 men (although only an approximate 33 men would make the full journey)–left St. Louis for the American interior.

The expedition traveled up the Missouri River in a 55-foot long keelboat and two smaller boats. In November, Toussaint Charbonneau, a French-Canadian fur trader accompanied by his young Native American wife Sacagawea, joined the expedition as an interpreter. The group wintered in present-day North Dakota before crossing into present-day Montana, where they first saw the Rocky Mountains. On the other side of the Continental Divide, they were met by Sacagawea’s tribe, the Shoshone Indians, who sold them horses for their journey down through the Bitterroot Mountains. After passing through the dangerous rapids of the Clearwater and Snake rivers in canoes, the explorers reached the calm of the Columbia River, which led them to the sea. On November 8, 1805, the expedition arrived at the Pacific Ocean, the first European explorers to do so by an overland route from the east. After pausing there for the winter, the explorers began their long journey back to St. Louis.

On September 23, 1806, after almost two and a half years, the expedition returned to the city, bringing back a wealth of information about the largely unexplored region, as well as valuable U.S. claims to Oregon Territory.