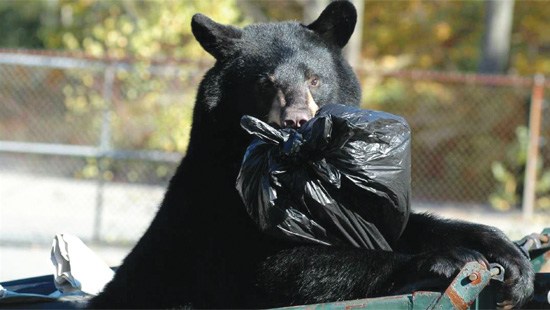 Lockwood bear is a reminder to lock up garbage, attractants
By angelamontana

We know you know bears are out, but here is a reminder of why it is important to make sure your garbage and other attractants are sealed and not accessible to wildlife.

BILLINGS — At least one black bear that has been hanging around homes east of Lockwood should serve as a reminder for people to keep garbage and other attractants out of the reach of wildlife.

Numerous people in the eastern part of Emerald Hills reported this week that a bear was ransacking their garbage containers. Thursday, a Fish, Wildlife and Parks game warden fired bean bags from a shotgun at a small black bear to haze it away from garbage cans.

Game wardens believe the bear found food in the area and will continue to hang around as long as attractants persist. When a bear becomes acclimated to human attractants such as garbage, it generally ends badly for the animal, they said.

Both Wednesday and Thursday, many residents of Emerald Hills left garbage cans out for scheduled pickup.

To remain safe and prevent bears from getting in trouble, FWP is asking residents to remove any opportunity for bears to seek or find food in or around their homes, businesses and vehicles.

Residents should store all garbage inside until it is ready to be picked up. In addition, barbecue grills, pet food, horse pellets and livestock feed should remain in a locked building. During this time of year, people in bear-prone areas also should remove all bird feeders and clean up garden waste and other potential food sources from their yard. Bear-proofing also includes thoroughly cleaning decks and patios around barbecue areas to remove odors from previous cooking.

If bears do not find food in one location, they will look elsewhere. Animals will not stay where they find only clean, bear-proofed homes, businesses and vehicles.

Berries and other natural foods are in amble supply this year, so bears will go looking elsewhere if they do not find attractants near towns. (via MT FWP)

(photo via The Outdoors Guy)