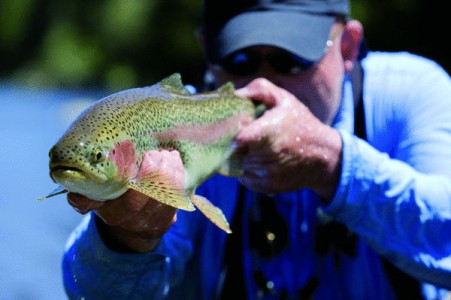 Montana Troutfitters Fishing Reports as of 6.1.18
By angelamontana

According to Montana Troutfitters, as of June 1st, they recommend you avoid the Yellowstone River.  Here’s what they had to say on Troutfitters.com:

Going, going, going…. gone! The Yellowstone has hit 30,000 CFS and is showing no signs of slowing down! I would avoid this river for a few weeks. Don’t worry, there are still plenty of good places to fish!

In addition to the Yellowstone River, Montana Troutfitters also suggests avoiding the Gallatin stating this:

The Gallatin is not the best option in the area right now. Its running really high and really muddy. Its at 6350 CFS and showing no signs of slowing down. This river will be best left to the whitewater enthusiasts for a few more weeks.

Here’s what they have to say about the Big Hole:

The river has been on a steady rise for a while now but is beginning to clear in the upper reaches. The flows are on their way back up to 10,000 CFS in Melrose, which is near the highest we’ve seen it in years. The tribs are starting to get big with snowmelt. The beautiful thing about this river is that it can be fished during the Spring run-off and now has close to two feet of visibility. Instead of getting dirty brown water it will get a deep tea color. Usually this is when you will begin to see the streamer bite pick up. Yellow is a color that shows up well in this water. Tan and gold have also been producing well. A good cast is the key to streamer fishing right now. The fish are tucked into the bushes on the banks. You have to be willing to lose a few flies if you head this direction. The river is in flood stage and is over a lot of its banks. This is washing a substantial amount of worms into the water. Nymphing with stonefly patterns and a worm pattern can sometimes be the set-up that will fish all day. If the fish will not commit to the big stuff, caddis larva and blue winged olive nymphs have been producing. Mother’s day caddis have also been on the move. Find some soft water and bust out the dry fly stick! Be extremely careful out this way. This river is notoriously difficult to wade and even more so at such a high flow. Additionally, if you plan to float the river make sure you know the stretch. There are a few diversion dams and nasty hydraulics and wave trains in the canyon stretchs. Stop by the shop for information on stretches that may be safer options. As a rule of thumb, stay above the wise river. This river is almost doubling the overall flow and rowing a hard side below this point can be dangerous if you do not know what you are doing.

If you are looking to fish at Yellowstone National Park, here’s what they are saying about that area:

The Park opened to fishing this past weekend. With the high water this year across the Park the West side is the only area with good conditions. The Firehole has the best clarity and temps in between 55 and 60 degrees. There are dries flying but only a few sporadic fish are on them. To have a productive day you need to be nymphing or swinging a small dark bugger. Over the next two weeks the fish will begin to surface feed more. Midges are out in the morning, and when they subside there a BWO’s during the day. In the afternoon and evenings the very first of the White Miller Caddis, we saw maybe 6 in two days, had hatched. Over the next week we should see a full emergance. The Gibbon is big and a very deep tanic color. Fish downstream of the falls, from Gibbon Meadows upstream it is still very swampy until the water level comes down a little more. The Madison is big, swift and to the top of its banks. Fish from the bank to be safe unless you know the river very well. Stonefly, mayfly and caddis nymphs will get fish along slower moving banks but some nice fish are belly down to the bottom in some heavier current. These fish are targeting buggers very good on the swing. The Northeast corner is experiencing a lot of run-off and we will need to wait before we can get some fishing in this part of the Park.

There you have it.  For more fishing reports and information on Montana Troutfitters, visit them at troutfitters.com.