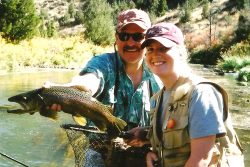 Morgan has been busy on the rivers in the area. His report covers several waters this week. You will notice that the waters have finally become fishable but that the water temperatures are rising. Some rivers, like the lower west Gallatin are critically low due to irrigation needs.

Fly shops, like Dan Bailey’s in Livingston, have been busy. Everywhere I have fished has been full of guided parties.

Be careful when playing and handling fish. Practice proper Catch and Release techniques. Minimize picture taking sessions. Keep the fish wet and in the water. The stress of lower and warmer water is taking their toll. Raptors and pelicans are also feasting on the more vulnerable trout and whitefish.

Here is this week’s Hefty Report!

I’ve compiled some data here for a little bigger report for ya! The Gallatin River info is coming from my good buddy from guide school and now coworker Kyle Knutson.

Gibbon River– The water is getting pretty warm so ensure short handling times for fish. Beetles and other smaller terrestrial patterns are getting fish to eat on top as well as some smaller Caddis. BRING YOUR BUG SPRAY. The horseflies are very thick right now.

Firehole River– Some Caddis are out but the bug story seems to be PMD’s. Trailing a smaller bead head such as a Pheasant Tail or Hares Ear should get the job done.

Lamar River– Dead drifted or stripped darker buggers along the banks has been successful with some nice Cutties eating them. Standard Elk Hair Caddis in a size 12 or 14 got some fish munching up top as well.

Gardiner River– Nice fish are being caught on a large array of attractor and terrestrials top water. On the opposite end a size 18 Caddis produce lots of fish as well.

Boulder River– PMD’s in good number are coming off and catching quality fish, as well as some smaller fish still worth mentioning. Smaller beadhead droppers, as well, will get into the fish unwilling to come to the surface. Some very large fish are rising out in the middle as well. If you can get the line out there, control your drag, and set a hook at 50 feet go for it!

Yellowstone River– Big Ugly streamers with lots of action will get you into a nice brown or two. Caddis and PMD’s are coming off in good numbers in the evenings. A larger terrestrial pattern should get some fish moving as well with hopper season right around the corner. Larger bead heads run as deep droppers should stir up some action on the warmer days.

Madison River (Lower)- The water is really hot now so hitting it early in the morning is the most ethical way to go about catching fish right now. It is prime floater season right now, so the fish will be extra stressed out. It’s best to find some other waters to fish for a couple of months until the temps drop back down.

Gallatin River– Lighter colored Caddis in the evening with a pupa nymph will get on some fish throughout the canyon. Medium sized attractors such as a Madam X produced as well. Frenchies and red collared Pheasant Tails as droppers had us on fish every few casts.

So, there you have it! A Hefty Report to motivate you to get out and go fishing!

Catch a BIG ONE!