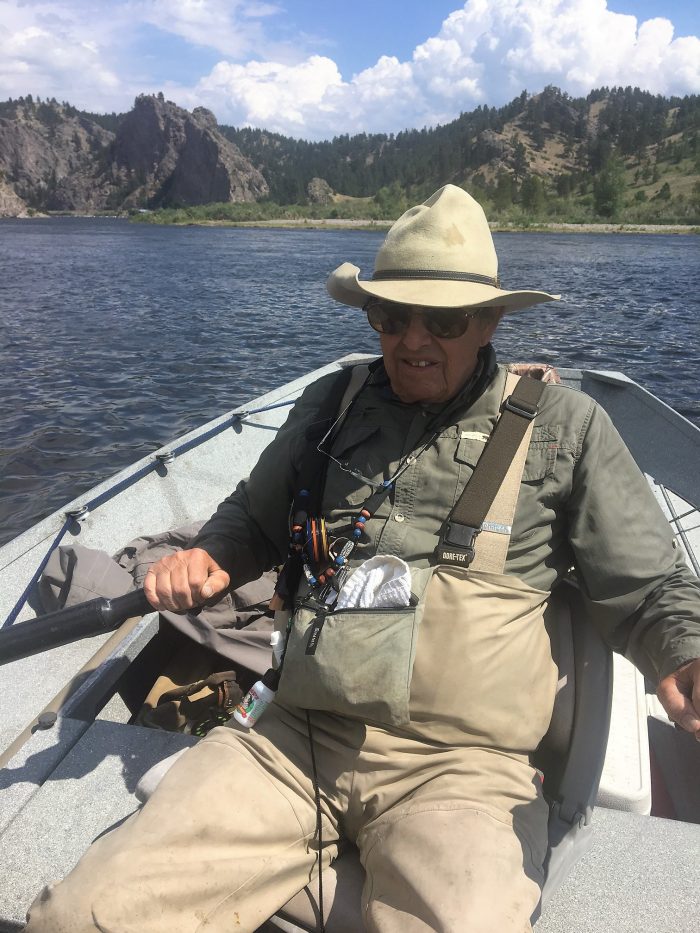 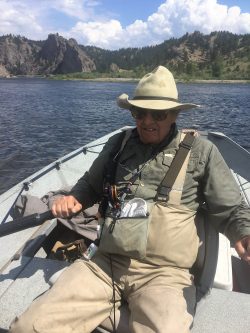 Jawbreaker Joe is a windy guy! His mouth is always working and during our last couple drifts, so were his rowing arms! Joe has been fishing the Missouri for decades. He knows the river well. Never does he ever remember wind like Thursday! JJ has become a wind magnet! We were barely able to float downstream. Gusty winds from a front moving across slowed our drift to Mid Canon.

Fly fishing was next to impossible as well. Before the winds, we were able to get on a nice pod of rising trout at the downstream end of a small island. Every other boat and bank fisherman had the normal haunts staked out. We saw 2 fish caught.

Our little nook was in a spot that was tough to see. The fish were rising well but the broken water and current made it almost impossible to see. Thank goodness for polaroid glasses and experience. We tried the usual nymph combos and only raked weeds off the bottom up to this point.

Pale Morning Duns were coming off in force. The surface was covered with cripples and spinners. As the spinner fall grew, the fish became more active. We netted a few dozen rainbows from 12-25 inches. Facing upriver, and wet wading allowed us position for easy casting and no glare vision. The wind was growing but we were busy catching fish. I thought it was just Joe spinning more yarns.

After wearing out the trout, it was time to cruise down the river. Easier said than done. The only problem was the upriver gusty wind. Our square ended pram style boat caught the wind easily. Even in the currents, we were unable to make any headway. Joe kept at the oars and expertly guided us downstream slowly but surely. The cruise was more like a crawl.

So much for a “Three-hour Cruise”! Our little ship was tossed, splashed and blown around like a little bobber. Finally, we came to gravel beach take out at Mid Canon. Jawbreaker Joe was tired, but his Popeye the Sailor arms kept us adrift and heading downstream. Hopefully, next weeks drift will involve more fish stories and less wind.