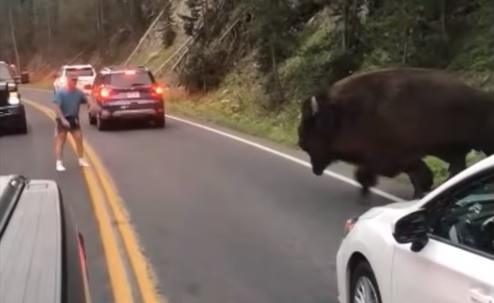 Yellowstone National Park Superintendent Dan Wenk said, “We appreciate the collaboration of our fellow rangers in Glacier and Grand Teton national parks on this arrest. Harassing wildlife is illegal in any national park.”

Reinke had been traveling to multiple national parks over the last week. On July 28, he was first arrested by law enforcement rangers at Grand Teton National Park for a drunk and disorderly conduct incident. He spent the night in the Teton County Jail, and was then released on bond.

Following his release, he traveled to Yellowstone National Park. Rangers at Yellowstone stopped his vehicle for a traffic violation on July 31. Reinke appeared to be intoxicated and argumentative. He was cited as a passenger for failure to wear a seatbelt. It is believed that after that traffic stop, Reinke encountered the bison.

Yellowstone rangers received several wildlife harassment reports from concerned visitors and found Reinke later that evening, issuing a citation requiring a court appearance. The video of the event surfaced after that citation had been issued.

On Thursday, August 2, Yellowstone rangers connected Reinke’s extensive history, and seeing the egregious nature of the wildlife violation, the Assistant U.S. Attorney requested his bond be revoked. The request was granted and on the night of August 2, a warrant was issued for Reinke’s arrest.

Reinke had told rangers that his plans were to travel to Glacier National Park. Last night, August 2, Glacier National Park rangers began looking for his vehicle. Simultaneous with that search, rangers responded to the Many Glacier Hotel because two guests were arguing and creating a disturbance in the hotel dining room. Rangers identified one of the individuals involved as Reinke.