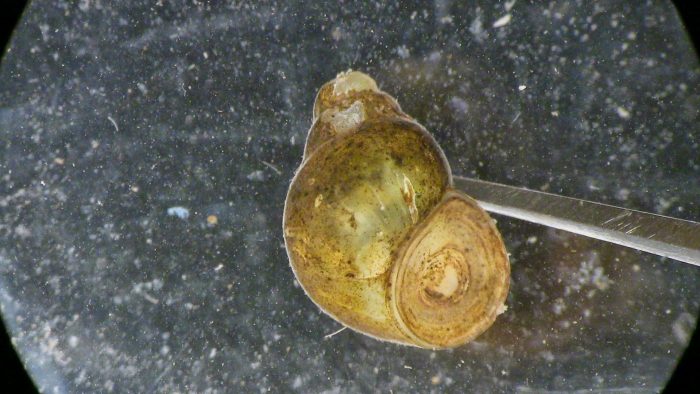 A Fish, Wildlife & Parks aquatic invasive species monitoring crew has confirmed that invasive faucet snails have been discovered in Lake Frances near Valier. The small aquatic snail, also known as a mud bithynia or Bithynia tentaculata, is native to Europe and likely arrived in North America in ship-ballast water in the late 1800s. Faucet snails were first observed in Montana in 1959.

Faucet snails can host several exotic parasites that cause waterfowl to die when ingested. These parasites have caused several die-offs of American coots on Georgetown Lake since 2006. Faucet snails have been detected in Smith Lake near Kalispell, Rattlesnake Reservoir near Billings, Upsata Lake, Flathead River and McWennegar Slough.

Lake Frances is privately owned by the Pondera County Canal & Reservoir Company (PCCRC) and is used to store and deliver irrigation water to its members from Dupuyer to Conrad. PCCRC provides recreational access to Lake Frances at no cost to the public.  Recreators are reminded to always clean, drain and dry their watercraft and fishing gear to prevent the spread of AIS.

FWP first learned of the snail from a fisherman trolling on Lake Frances in May. He picked up two clams and a snail on some vegetation and submitted the samples to FWP for identification. The clams were determined to be native pea clams, but the snail was identified by two different experts as a faucet snail.

FWP relies on the public to be on the lookout for invasive species and report suspected sightings. If you see or suspect a new infestation of an invasive plant or animal, save the specimen if possible and include details on the location where you found it.

Here is some information on the faucet snail from USGS:

Identification: The faucet snail has a shiny pale brown shell, oval in shape, with a relatively large and rounded spire consisting of 5–6 somewhat flattened whorls, no umbilicus, and a very thick lip (Clarke 1981; Jokinen 1992; Mackie et al. 1980). The aperture is less than half the height of the shell (Clarke 1981). Adult B. tentaculata possess a white, calcareous, tear-drop to oval-shaped operculum with distinct concentric rings (Clarke 1981; Jokinen 1992; Pennak 1989). The operculum of juveniles, however, is spirally marked (Jokinen 1992). The operculum is always located very close to the aperture of the shell (Jokinen 1992). The animal itself has pointed, long tentacles and a simple foot with the right cervical lobe acting as a channel for water (Jokinen 1992). 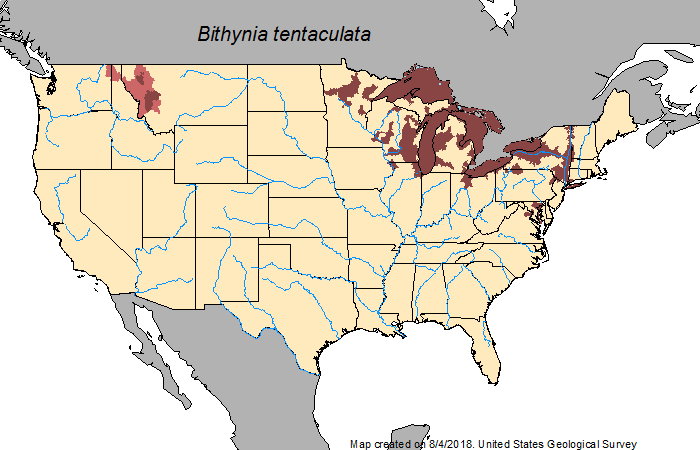