Break-action single shot rifles are not terribly expensive. The very popular Thompson/Center® Encore® and Contender® rifles are available in just about every caliber imaginable and come in various barrel lengths. One of the very cool features of these rifles is the ability to interchange barrels to fit nearly every hunting situation possible. One can hunt dangerous game with a large caliber bullet such as 45-70, switch to something like a .300 Magnum for longer range shots at big game, use .204 Ruger for varmints, and finally load up a 12 gauge for turkey or waterfowl. All this can be done with barrel changes that take just minutes. This explains why the T/C® guns are so popular and in addition, they are some of the strongest designs ever produced. Another great manufacturer of single-shot rifles is H&R® (the grand old firm Harrington and Richardson®). Low cost, high quality guns have been the hallmark of this company since its beginnings. 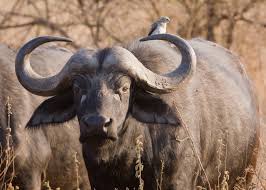 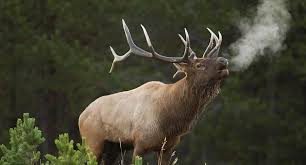 Side x Side and over-under rifles are usually chambered in dangerous game cartridges and are very expensive. .375 H&H Magnum, .470 and .500 Nitro-Express are very common in double rifles. The barrels of these guns have to be regulated; in other words, they are painstakingly adjusted to hit the same point of aim at about 100 yards (approximately 91 meters). These are handcrafted, strong, and very beautiful guns. Checking the few manufacturers that produce double rifles, one finds suggested retail prices beginning in the 18-20 thousand dollar range. Prices go up quickly to $ 50,000 or more, easily reaching 6 figures. As a side note, the John Rigby & Co. (Gunmakers) LTD has been repatriated back to its original home in London, England. This venerable company had been manufacturing their great rifles in California for about 15 years. While I am proud of American ingenuity and manufacturing, it seems most fitting that Rigby rifles have found their way home to London. 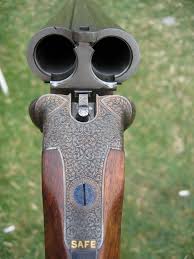 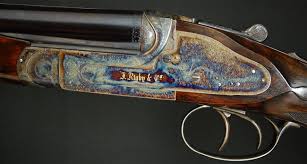 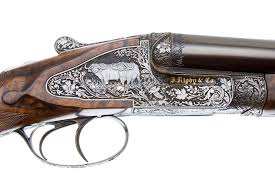