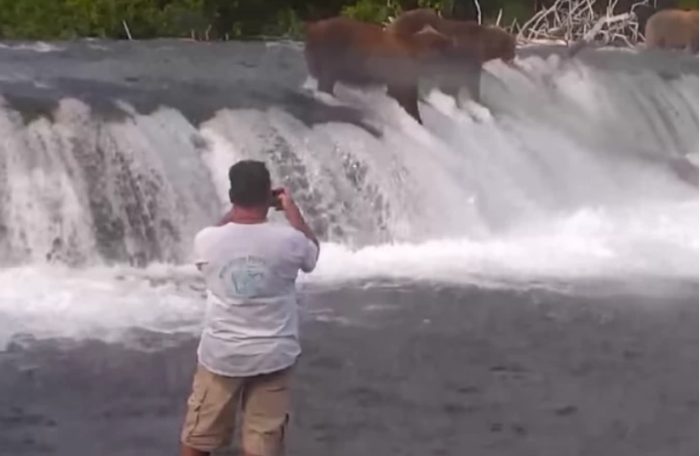 If you are visiting a national park in Alaska, and you happen to be on a bear-viewing platform, watching brown bears gobble up salmon in the river, don’t go out in the water with them to get a picture….

A man actually did that and ended up on the park’s livestream video feed.  Here’s what Vice reported on the incident:

“…the guy inched his way toward the animals scarfing down salmon near a waterfall, turned his back to them, and assumed that familiar posture of dads everywhere embarrassing their kids to get a pic. Then, presumably inspired by the irresistible thought of an even better selfie, he waded in further, getting closer to the ravenous beasts for what could’ve been the last photo he ever took.”

Just so you know before you try and get a selfie with a grizzly bear at Glacier National Park or Yellowstone, bears are dangerous and wild animals…they are not your friends.  They do not understand what you’re saying when you talk baby talk to them, so just leave them alone, and don’t risk your life for a selfie.

In what one National Parks official called an “unprecedented” act of stupidity, the guy’s expedition into bear-infested waters was as dumb as it was illegal, and could have disrupted the bears’ food supply.

Park rangers have gotten in touch with this not-so-bright person and the two other people he was there with.  All three are facing criminal charges.