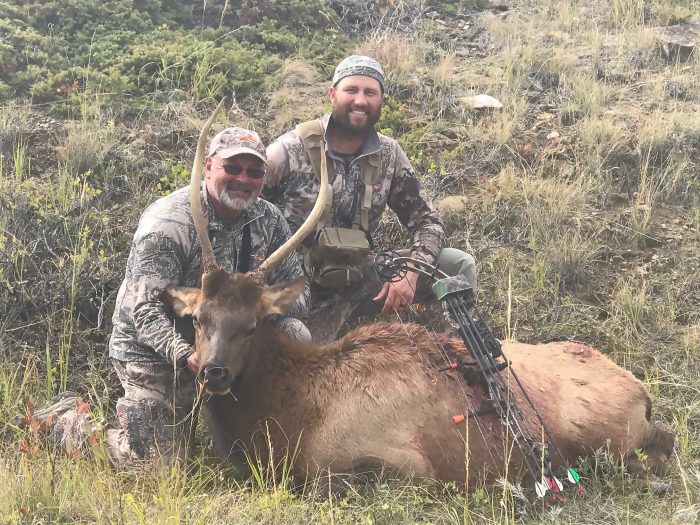 Elk Down with One Minute Left on the Last Day In Hunting Camp!
By angelamontana

The Captain from the Montana Outdoor Radio Show goes hunting with Burke Ranch Outfitters in the Larb Hills every year. In the past, he has stuck a cow elk and a 6 point bull elk with his bow. The years that he comes home elkless from archery camp has more to do with his stray arrows that missed the target rather than not getting some great shot opportunities.

This year was no exception. Taylor Michels and Kelly Burke both supplied the Captain with some close encounters. The first was courtesy of Kelly Burke. Kelly called in a 5-point bull to around 60 yards, but the elk was behind a tree. The other issue was the bull was herding a cow that was with him, and she seemed like she was running the show, until a spike bull elk decided to join in the fun. The 5-point turned and chased the spike right to where the Captain was standing to give a shot at that 5-point bull, not the spike. The Captain decided to pass on the spike at 35 yards and then got busted by the spike. The next thing he knew, the three elk moved on down the ridge out of sight.

The next evening, Tayler Michels called in a 4×5 bull elk. The elk came downwind of the Captain and turned around at 40 yards. At that point, all the Captain could see was the horns. By the time he got a full body broadside look, the elk had moved to 60 yards, and the Captain let an arrow fly only to miss the bull with a low shot.

The third encounter was the charm.

The next morning was Saturday, the last day in hunting camp. One more morning hunt, and the hunting trip would be over. Tayler and the Captain headed out hunting at 6am. The Captain even had a chance to call into the Saturday morning show (listen to it online here). As the morning progressed, it appeared like the Captain would go home elkless. Then, they spotted a lone bull that was a spike, and it looked like he wanted to bed down for a mid-day nap. It took a couple of hours, but he finally did bed down in some thick, tall brush. You could barely see him. In fact, if they hadn’t waited him out and watched him bed down, they would have never known he was there!  As he always does, Tayler came up with a plan.

He positioned the Captain 40 yards from where the elk was bedded downwind. The plan was to throw rocks in the thick, tall brush to get the elk to move out so the Captain could get an attempt to stick an arrow in him. It took Tayler three rocks to do the trick. The elk came out of the brush to see where the rocks were coming from. At that point, the elk was 40 yards broadside, and the Captain made a perfect shot. The elk went 50 yards and was down. All this happened at 12 noon on Saturday. The last day with no time to spare.

Now, that’s a great story!  Congratulations, Captain!  We all hope to be invited if you have an elk bbq before the snow flies!  Nice work!