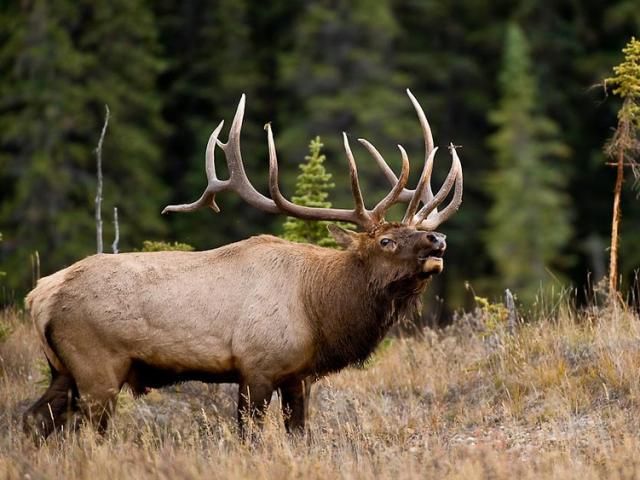 WHERE TO AIM!!!
By Montana Grant 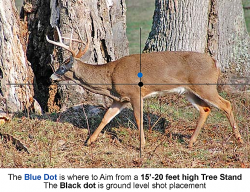 The goal of every hunter is to make a perfect shot, but what does that mean? The arrow or bullet needs to impact exactly where it is aimed.

Aim for the Exit!!! The other day I was called upon to track a buck that was wounded from an arrow. The hunter had made a “perfect shot”. In almost every case where I have had to recover a wounded critter, it was a “perfect shot”.

In many cases, the critter is hit behind the shoulder in what looks like the kill zone. This area contains lungs, heart, or liver. The buck we were searching for was hit exactly at the center of the shoulder in the kill zone, but the angle was wrong. The arrow hit a rib and passed out the other side without touching any vitals. The deflected arrow changed its angle by nearly 45 degrees. By adjusting the angle and aim point, we would have been filling out a harvest tag instead of searching for a wounded animal.

Ideally, you want to make a double-lung shot. Broadside shots offer the best and most consistent angle for an ethical and effective harvest. That means that you need the bullet or arrow to pass through both lungs. Will Primos, the famous hunter and caller, says that “if you make a double-lung shot, they will lay down like babies”. Elk and deer that I have harvested with an arrow, gun, and broadside shots, never knew what hit them and laid down within 50 yards.

Practice the shots you anticipate. If you are hunting from a ground blind, tree stand or still hunting, shoot from these positions. The projectiles that you shoot arc and have a trajectory. You will learn this when shooting up and down hills.

AIM for the EXIT!!! This sounds so simple, but this is the mistake most hunters make. You need to imagine where the projectile is going to exit the target. This wound channel is essential to making a clean and humane harvest. You may need to aim slightly back, forward, higher, or lower. The goal is for the projectile to hit vital organs without deflection or obstruction.

Once you visualize where the arrow or bullet will exit, connect the dots and aim for that angle. I rarely take any shots other than a broadside angle. Other hunters will argue that an angled shot, or a frontal shot or something else, is just as effective.

Don’t take a shot that you have not practiced.

“AIM SMALL, MISS SMALL!”  “ONE SHOT, ONE KILL!” These phrases are often used when teaching marksmanship. The one important shot is a result of hundreds of practice shots.

For more Montana Grant, aim for his website at www.montanagrantfishing.com