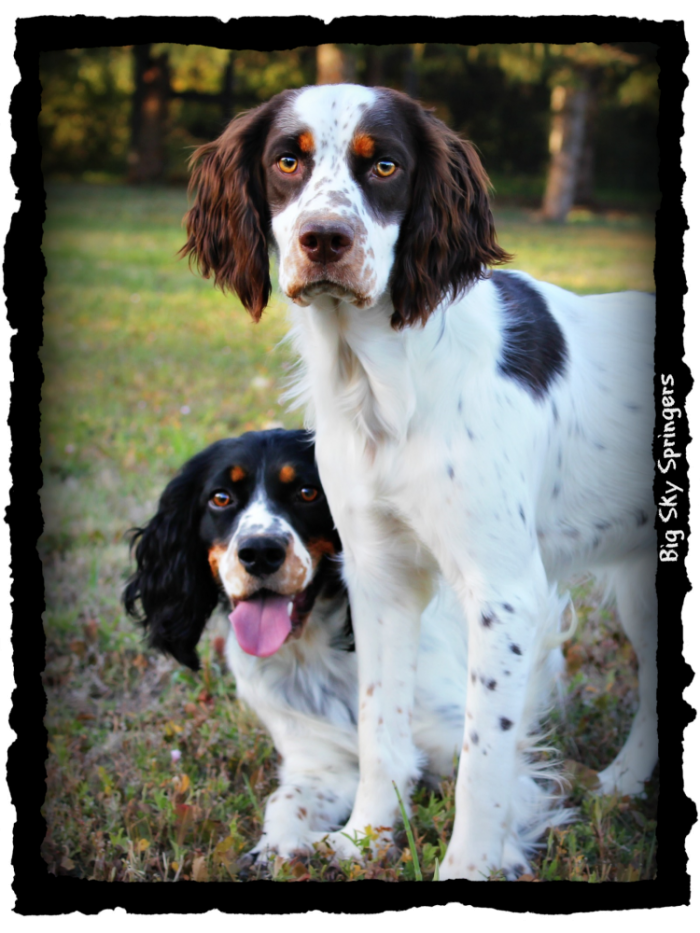 For those of you who are regular readers of this column you know we mostly discuss firearms, firearms history and accessories, ammunition and reloading, and the use of each. Over time we looked at how we Montanans use our guns for hunting, shooting sports, and of course, self-defense. I truly enjoy shooting all types of guns, but shotguns, especially the sweet 16 gauge, hold a very special place in my heart and when I combine my smoothbores with an English Springer Spaniel, well, it’s just be Heaven on Earth.

Spaniels have very old origins. There are some figures of dogs similar to spaniels dating back to 3,000 B.C. and in 1387 Gaston de Foix mentions spaniels that “quarter in front of their masters.” After 1800 the spaniels were divided into three groups: Lap Spaniels (under 14 pounds), Cocker Spaniels (14 to 28 pounds), and Springers or Field Spaniels (over 28 pounds). In the beginning bloodlines were not kept separate, but in 1812, the Boughey family of Shropshire, England began to keep a pure line of Springer Spaniels. In 1895 the sporting Spaniel Club held its first field trial and the larger faster Springers began to beat the Clumber, Cocker, and Field Spaniels. Knowing Springers as I do, I’m sure it was no contest. It is believed that purebred Springers came to America in 1907. Eudore Chevrier of Manitoba began importing and training them in large numbers in 1921 and in the U.S., Freeman Lloyd brought the breed to prominence in New England. The English Springer Field Trial Association was formed in 1924; a standard for the breed was approved, revised, and finally adopted in 1932. American Kennel Club approval followed. 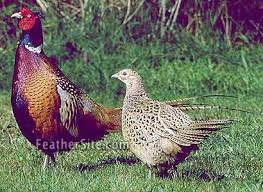 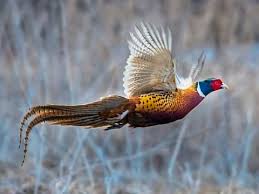 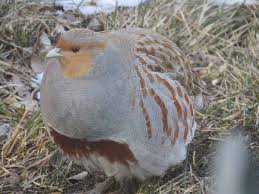 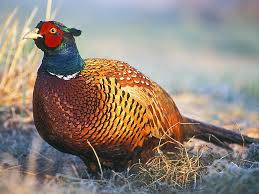 Most male Springers weigh between 45 and 55 pounds, females 5 to 10 pounds less, although I’ve seen some of the dogs that tip the scale at close to 100 pounds. Their coats are wavy, not curly; liver and white dogs predominate, but black and white are also common. Some, like our pups, are what are called tri-color, which is they have some tan markings and freckles.

Field bred Springers are known as “flushing dogs.” They are really great hunters when it comes to birds that run and hide in heavy cover. If you want to hunt ring-necked pheasants, get a Springer Spaniel. I’ve been hunting with Springers for decades and I’ve never seen another breed that is as athletic and agile as these spotted dogs; they are unrivaled when it comes to chasing the wily rooster pheasant. 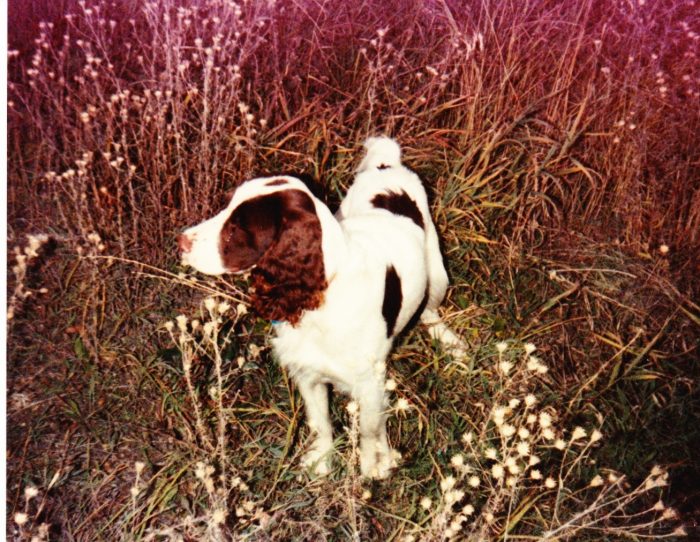 The very best hunting dog I ever worked with was my own Springer pup Spot, he was spectacular. Born in November, 1984, Spot and I hit the fields in the fall of 1985. For years he and I chased those very smart pheasants of Western Montana. While I would walk up to 15 miles a day, Spotter would probably cove 30 to 40, all in heavy brush and cattail wetlands with a drive and determination I have rarely witnessed. His nose, lips, and chin would be rubbed raw and often bleed. He never quit, hunting was his great passion and I am grateful that I could share those days with him. He left in 1995, and I will miss him forever. 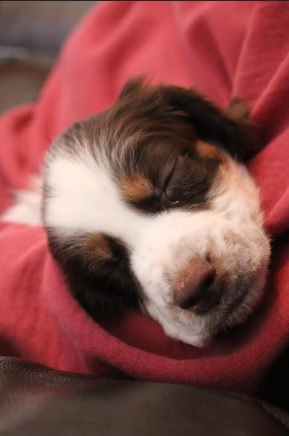 We now have two Springer pups, Archibald who will be 3 years old in a couple of weeks, and Barnaby who is 3 months old. Archie is a liver and white tri-color and Barney is a black and white tri. They are full brothers, same parents. Archie is one of the most athletic dogs I’ve ever seen and he has incredible hunting instincts. Circumstances have prevented Archie and me from spending as much time in the field the last couple of years as I would have liked to, but this year we are really having some fun. It appears that Barney has all the attributes of older brother Archie. Barney is tenacious, but has been a bit easier to train than Archie. Both are sweet and loyal pups who love being with my wife and me. 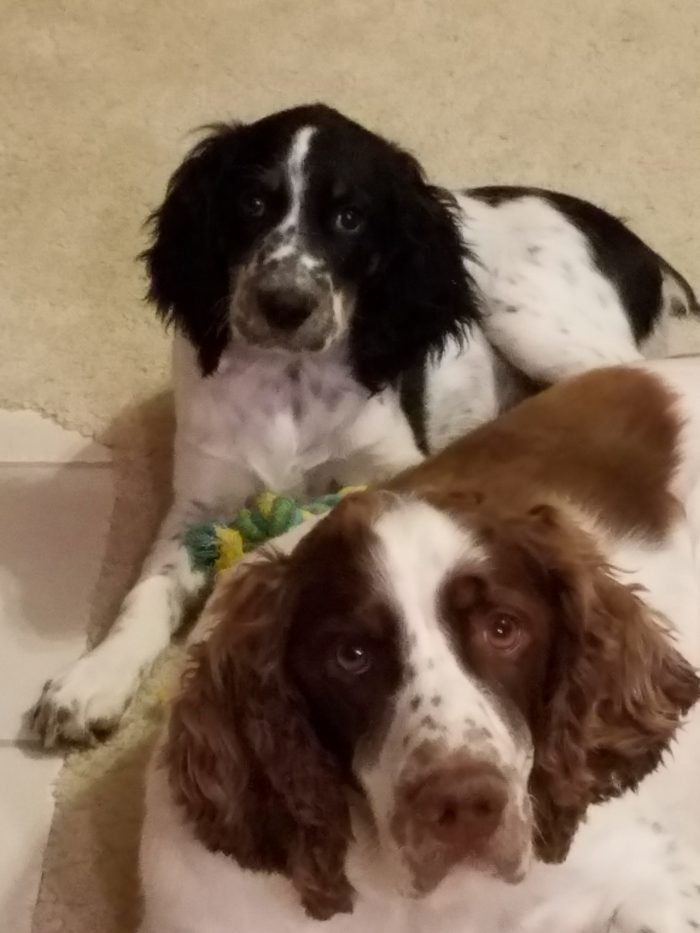 Springers are wonderful family dogs; easily trained, incredibly loving and sweet. While they alert when someone or something is near, they are not guard dogs. I’m sure if they had keys to our house, they would let anyone in. Company is welcome in their world. Springers are very active dogs, not high strung, but always wanting to play. They engage in what has been called “happy bustle,” in other words, go-go-go all day long. My cousin once told me, “you can’t tire them out, they just go until they break.” Our dogs love children, I guess that’s because we are old and the kids last longer than we do.

If you are interested in adopting one of life’s great pleasures, an English Springer Spaniel, I heartily recommend the breeders we got Archie and Barney from. Big Sky Springers raise some of the finest examples of the breed you will find anywhere. For the folks at Big Sky Springers, breeding the dogs is a labor of love. Their puppies are “Springers for those who are searching for a loyal companion and/or bird dog! Our dogs and puppies are “eager to please, quick to learn and willing to obey.” Check out their website: http://www.bigskyspringers.com. One of these puppies will steal your heart for a lifetime.