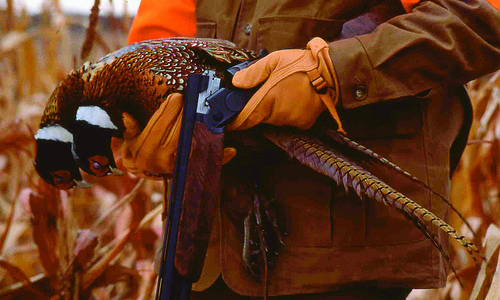 Pheasant hunters should be prepared to encounter bears
By angelamontana

In Montana, bear country can be anywhere in the western half of the state and sometimes beyond. In recent years, grizzly bears have shown up in prairie habitats east of the Rocky Mountain Front.

For years, elk and deer hunters in western Montana have taken to the woods prepared for a grizzly bear encounter by carrying bear spray, following food storage guidelines and by keeping a watchful eye out for bear sign.

However, with an expanding grizzly bear population into the prairie and agricultural lands in central Montana, bird hunters must now follow suit.

Autumn is the time of year when bears move off seasonal sources of food, such as berries and chokecherries, and start looking for other things to eat. This annual search for food and calories is called hyperphagia, and it’s what bears do in preparation for a long winter’s hibernation.

Bird hunters should understand they could be in close proximity to bears even if they’re miles away from the Rocky Mountain Front. Hunters should be particularly careful near thick patches of brush and even more so in those thickets along canals and creeks. Grizzlies have even been known to bed in tall grass or cattails but prefer very thick shrubs. Keep a watchful eye on hunting dogs as they may stir-up a grizzly sleeping in its day bed.

Pheasant season starts Oct. 6 and hunters in grizzly bear country should be prepared for an encounter by carrying bear spray and being ready to use it, hunting with a partner, and by always letting someone know where you’ll be. Additionally, just like in the mountains, hunters should look for bear sign and avoid areas where the sign is fresh. If possible, make plenty of noise in areas where visibility is limited, even in areas where you wouldn’t expect bears.