Continued mild weather contributed to lower than usual hunter activity and harvest through the second weekend of hunting season in western Montana.

“Weather is always the driving factor in big game harvest, especially early in the season,” said Mike Thompson, Montana Fish, Wildlife and Parks (FWP) Region 2 Wildlife Manager.  “When the weather is fairly warm, and we have rain instead of snow, deer and elk don’t move much, making them harder to spot and track.”

This is the first year that NRCS Snotel stations at Copper Camp (Blackfoot), Saddle Mountain (Bitterroot) and Peterson Meadows (Upper Clark Fork) have simultaneously reported zero snow depth going into the second weekend of the big game hunting season since FWP began tracking this indicator of hunting conditions in 2001.

While some hunters stayed home, waiting for colder, snowy weather, those that did head out checked 106 elk, 27 mule deer and 83 white-tailed deer so far this season through the region’s two hunter check stations near Darby and Bonner. The 36 elk checked at the Bonner station is under last year’s 46 but higher than the tally for the first two weekends of the season 2013 through 2016.

The Anaconda station is not open this year; instead two chronic wasting disease (CWD) surveillance stations are in place in the nearby Flint Creek Valley.

The general rifle season for deer and elk runs through Sunday, Nov. 25. 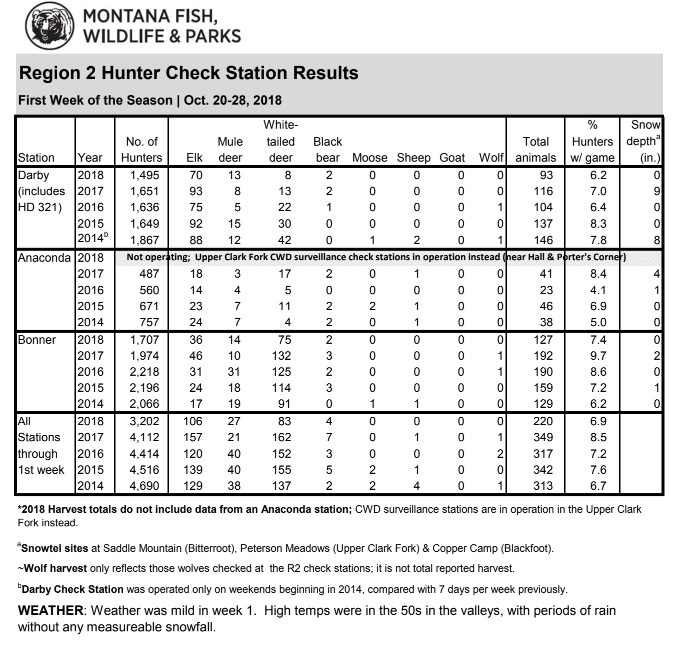