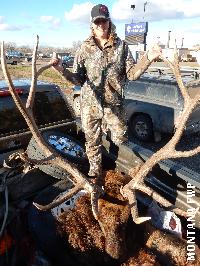 “Overall, Sunday was a very nice wrap-up to the general big game season,” said Miles City-area Wildlife Biologist Steve Atwood, who coordinated the Hysham station. “For the most part, hunters were content and satisfied with their season.”

“Harvest success was very comparable to the previous three seasons,” Atwood said. “The last three years have been 68 percent success on closing day.”

Hunter numbers were also right on average for previous closing weekends, with 159 hunters in 78 parties.

Atwood said one thing that stood out to him was the significant number of hunters who traveled to eastern Montana to visit and hunt with family.

“It’s apparent that sportsmen value the opportunity to spend time hunting deer with family over the Thanksgiving weekend,” he said.

Hysham workers checked 78 mule deer – 64 bucks and 14 does – and 29 whitetails – 23 bucks and six does. No elk came through the station that day, which was manned by Atwood, Regional Supervisor Brad Schmitz, Upland Game Bird Biologist Justin Hughes and Hunting Access Coordinator Travis Muscha. 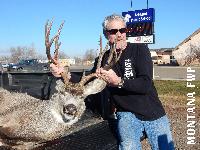 It was also a good day for goose hunters.

“We had a few parties of goose hunters come through who did very well,” Atwood said. “We’re probably at peak in terms of Canada goose numbers along the Yellowstone right now until we receive colder weather that results in ice on the river. At that point, some of the geese will move south, but there are typically open pockets on the river that will hold birds.”

In general, people have been able to find what they were looking for, according to Atwood. The animals are also in better shape going into this winter than they were last year, when a drought heavily impacted conditions for all wildlife. He’s observed good body condition and plentiful grass, which will help animals to endure the coming winter.

“It’s been a good year, just content hunters,” he said.

“The number of hunters, hunter harvest success and opportunity rates were similar to the same weekend last year,” said Broadus-area Wildlife Biologist Ryan DeVore. “Hunters had ample opportunity to harvest an animal (74 percent), and the majority of hunters were satisfied with their hunt (88 percent).”

“As is typical, during the last few days of the season, most folks decided to punch their tag if they hadn’t already, and a good number of them were nice bucks, including one exceptional mule deer harvested on Block Management,” DeVore said. “The abundance of game observed by hunters was mixed; as usual over the last few years, most groups saw moderate to high numbers, but a decent percent of hunters also saw fewer game than they expected.”

Ashland workers visited with 169 hunters in 83 parties, compared to 153 hunters in 79 parties last year. The success rate was 47 percent, up slightly from 2017.

Most parties were primarily after deer or elk. Hunters brought 64 mule deer through the station – 46 bucks, 12 does and six fawns. Thirteen whitetails were checked, including seven bucks, four does and two fawns. Workers also saw seven elk, with two adult bulls, one yearling male and four cows. A hen turkey wrapped up the animals checked.

The Glendive check station was slower, as is typical. Wildlife Biologists Melissa Foster and Emily Mitchell checked 18 parties, 56 percent of which had game.

“A lot of folks had already punched tags and were accompanying friends, out looking for that last doe, or chasing a special buck,” Foster said. “We had a couple hunters who said ‘the one’ outfoxed them this year, but they’d be out there chasing him again next season.”

Glendive saw five mule deer bucks and one mule deer doe, along with eight white-tailed bucks and five antlerless whitetails. “We checked only two parties hunting birds, and only two pheasants,” Foster said. “That’s no surprise, since bird numbers are down this year. Folks aren’t out hunting them as much, and those that are aren’t finding much success.”

“We had several parties that were eastern Montana natives home visiting and hunting for Thanksgiving, and many of those parties had little kids with them. That’s always nice to see,” she said.