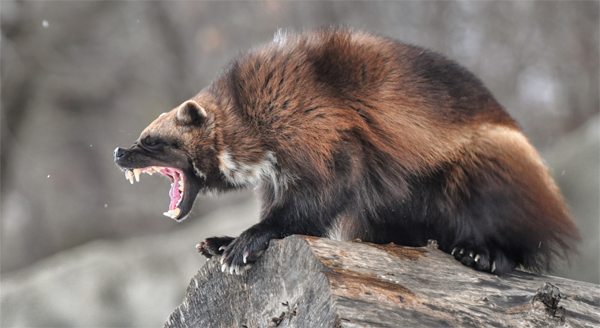 A Study on Wolverines Shows Surprising Results
By angelamontana

If wolverines are of interest to you, here’s something you might like from FWP’s magazine, Montana Outdoors:

In an unprecedented multistate survey, biologists found the forest carnivores everywhere they thought they should be—along with a few surprises. By Tom Kuglin.

This story is featured in Montana Outdoors November-December 2018 issue

To most people, it’s a wonder that biologists found any wolverines.

Only the size of a border collie, the elusive carnivores have home ranges of up to 500 square miles and live in the most remote reaches of North America. Few people, even backcountry outfitters, have ever seen one in the wild. So when scientists set out two years ago to find where wolverines occur in Montana, Idaho, Wyoming, and Washington, the task was daunting.

To do it, they used old-school wildlife monitoring gear, like scent lures and snowshoes, as well as snowmobiles and the latest computer-aided scientific analysis.

The four states, along with federal, tribal, and university partners, recently finished their first report on what’s called the Western States Wolverine Conservation Project. The document details the unprecedented multistate survey of this largest land-dwelling member of the weasel family. “This whole effort started with putting people who know wolverines in a room and asking the question, ‘What can we do to make sure this species is here decades from now?’” says Bob Inman, Montana Fish, Wildlife & Parks Carnivore-Furbearer Program coordinator.