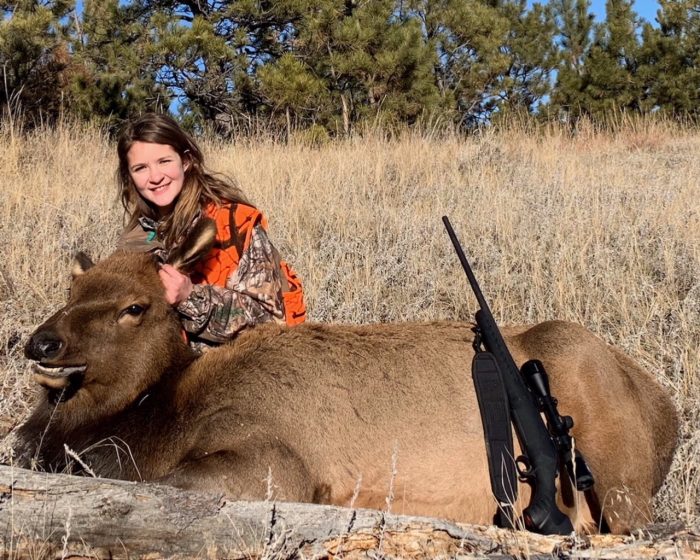 Earlier this year Andrew McKean of Hi-Line Sportsmen approached Kelly and Tami Burke of Burke Ranch Outfitters from Glasgow about donating a Youth Hunt to auction off during their annual banquet. The cash it raised would be put into the Hi-Line Sportsmen club in Glasgow but more importantly the youth hunt hit at the heart of why the organization was formed in the first place. That is because over the past decade, we’ve lost over 2 million hunters nationwide according to McKean. “The problem is demographic more than anything – we’re getting old and dropping out, and we’re not getting replaced at nearly the same rate with younger, beginning hunters. I’ve been working on this issue on the national level, but I wanted to bring it home – literally – and try to make a difference in my own town,” said McKean.
On Saturday, the opening of the special cow elk hunt in the 600 hunting district, Kelly Burke took 13 year old Cody Casey on her first elk hunt. She was successful, as Burke, who has a great way with guiding his clients to good ethical shots, was able to get Cody a 130-yard shot and she aced it. As an added bonus Cody’s father Steven was with her to enjoy the moment. The Captain from the Montana Outdoor Radio Show was also invited to tag along and witness the harvesting of Cody’s first elk.
MORE ABOUT HI-LINE SPORTSMEN
Hi-Line Sportsmen is a local (Valley County, but they also welcome anyone from neighboring communities in NE Montana) rod-and-gun club comprised of veterans of critter groups – from National Wild Turkey Federation to Ducks Unlimited to RMEF. They wanted to start a local group to do local work and keep local donations in the community. The idea of helping beginning hunters was one of the groups goals  .
They committed to reaching out to find out who could use a “mentor” to get started in hunting  and we got pretty good response. Hi-Line Sportsmen members ended up taking out about 7 or 8 of these first-time hunters (you can see a clip of their work here, from FWP’s Outdoor Report: https://www.facebook.com/MontanaFWP.R1/videos/377133606359009/UzpfSTE0NDE3NzE4NDA6MTAyMTg0NzU4ODQzMTUzNDY/?epa=SEARCH_BOX).
Hi-Line Sportsmen volunteer mentors took out a number of first-time hunters, including:
* 12-year-old Glasgow boy
* 23-year-old Billings man
* 50-something Glasgow woman
* 50-something Glasgow man
* 30-something California man
* 30-something Bozeman man
* 40-something Malta man
* the teenaged girl who went out with Kelly Burke

Everyone we took out ended up harvesting a deer – in some cases does, in other cases bucks.

Hi-Line Sportsmen members also donated about a dozen deer to the Glasgow Food Bank for distribution. They worked with local game processors to process the deer, in cooperation with the Hunters for the Hungry program. In all, about 300 pounds of ground venison was donated to the food bank through their efforts
Mckean says overall, the program achieved their goals, “which were to invite new hunters into the field and give them any assistance they needed, in terms of guidance, gear, or just giving them the confidence to become hunters. We also hoped to help FWP with game management by harvesting surplus antlerlessdeer, and finally, we wanted to contribute healthy protein to the food bank to help feed folks in the community who need assistance”.