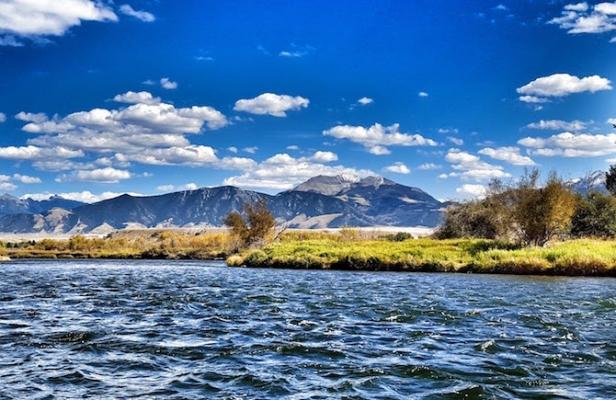 UNDER PRESSURE!!!
By Montana Grant

A recent report on the Madison River has just been released. This cherished trout river is a world destination for fly fishermen. The quality of the fishery and the Big Sky Country background makes the Madison the most amazing trout fishery in the world. Access is easy and fishermen flock to its banks to catch trout.  Big hatches, such as the June Salmon fly Hatch, are busy times along this river.

The Madison river is about 54 miles long between Hegben Lake and the Ennis Dam. This area is known as the Upper Madison. The Lower Madison ends at the headwaters of the Missouri River near Three Forks.

Every watershed has its ups and downs but as the number of fishermen goes up, the quality of the fishing goes down. We are loving this spectacular river to death.

The report netted several facts about the Madison River fishery.

Most fly anglers are not from Montana;

69% of all fishermen are not from Montana. Most of the non-resident fishing pressure is between Lyons Bridge and Hegben Dam. This is a Walk/Wade only area. Surveyed non-resident anglers generally are satisfied with their experience.

During the major hatches and nice weather, crowded rivers are a huge problem. Parking, impacts on access sites, and decreased quality of experience are a major issue.

Average Catch and Release mortality is 5%.

Even with perfect technique, some fish will not recover from being caught. It is estimated that thousands of trout perish due to being caught and released annually. Most of these fish are quickly eaten by the pelicans, eagles, ospreys and other local critters and are not seen.

Nearly 80% of the fishing pressure comes from guided trips.

Non-residents travel from Idaho and Wyoming and fish guided trips daily. West Yellowstone, Bozeman, Belgrade, Livingston, and Helena are major cites that service daily guide trips. Over 50% of the guide trips are by boats and rafts. The rest are from walk/wade guide trips. Parking lots at access points are often overflowing with parked vehicles and boat trailers. Some access sites, where camping is allowed, are crammed with out of state RV’s, tents, and campers.

18% of fishermen are from the resident Gallatin County.

5% were from nearby Gallatin County. Many “locals” fish elsewhere due to crowds and impact on the fishery.

The Madison River is still reeling from a major issue with Whirling Disease. Other diseases, invasive species, and predatory populations have also impacted the fish size and population density. State biologists have a major concern.

A new commission is about to create rules and guidelines to manage and protect this wonderful fishery. This should happen by April of 2019.

If you have any great ideas or suggestions to improve the quality of the Madison River fishing, contact the Montana FWP.

For more Montana Grant, find him fighting for great fishing at www.montanagrantfishing.com.