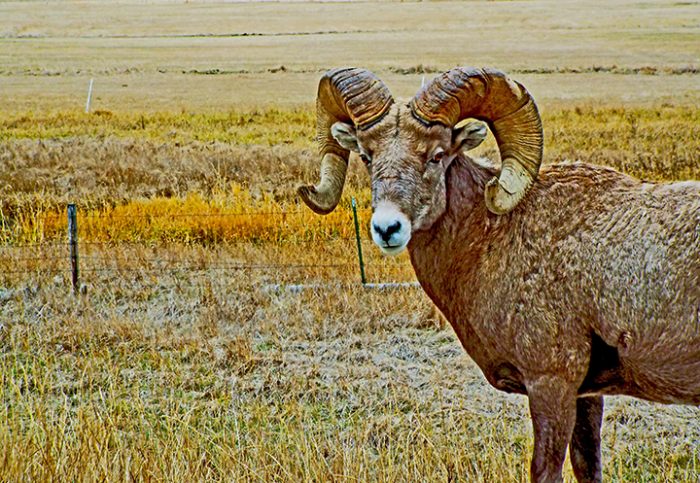 STEVENSVILLE – The publication of a big new all-color book featuring stories about the resurgence of Montana’s bighorn sheep populations in the wake of conservation efforts over the past 30 years that enabled a regeneration of bighorn sheep to record-setting levels – “Giant Rams of Montana” – was announced this week by Stoneydale Press of Stevensville.

The 272-page book features more than three dozen stories by hunters who have pursued the trophy rams, as well as text detailing the conservation-oriented management strategies that resulted in a resurgence of bighorn sheep in many parts of the state over the past 30 years. The book  includes a story about an incredible new world record bighorn from Wildhorse Island on Flathead Lake in 2018.

Author John “Timmer” Reeves of Butte pulled the book together, working with editor Dale Burk of Stevensville, who wrote the Foreword to the book – and more than forty writers whose experiences in pursuit of bighorns in Montana are told in detail – from those of a beginner hunter at the age of twelve to a number of men and women who spent more than three decades seeking one of the elusive permits to hunt record-level bighorns in Montana.

Reeves’ accomplishment in developing the concept of the book and undertaking the process of preparing its contents in a fashion to bring attention to the recent upswing in bighorn sheep populations and the major resurgence of trophy – even record-book size – bighorn rams in Montana was hailed by Shane Clouse of Missoula, president of the Montana Wild Sheep Foundation, as a major accomplishment because Reeves is both deaf and has Asperger’s Syndrome, a form  of autism, and  myeloma cancer, which is currently in remission. Reeves has been at work on the book for more than a year, Clouse said, and saw his original concept of a 192-page book grow into a volume that consists of 272 pages.

The right to pursue bighorn sheep in Montana is rigidly controlled by the state’s  Department of Fish, Wildlife and Parks – permits to hunt bighorn sheep  are, by far, the most difficult permits in the state to get. Such permits can only be obtained when an individual draws a special tag,  in competition, normally, with hundreds of other hunters. In some districts the odds are more than a thousand to one against drawing a permit. Many hunters, including the book’s editor, have never drawn a bighorn sheep tag in spite of applying for one for many years. A number of the stories in Reeves’ book appeared previously in slightly different form in a variety of national publications and were adapted to his concept of highlighting the idea of “Giant Rams of Montana.”.

The book contains more than 50 chapters, including the story of the World Record Ram from Wildhorse Island whose photograph by John Lewton graces the cover of the new book. More than 100 color photographs of hunters and their bighorn trophies are in the book, including stories of 16 rams taken that scored more than 200 Boone & Crockett points, 14 that were over 190 B&C points, 8 that were over 180 points – the minimum to make the record book – and 16 stories about the general pursuit of the bighorn sheep across Montana. Until recently, it was considered almost impossible to take a bighorn ram scoring more than 200 points.

A closing section of the book details the districts in Montana where bighorns can be hunted, a listing from the Boone & Crockett Club on the top 100 bighorns listed in the record book, and information on the history of and membership processes for the two major wild sheep organizations  whose efforts contributed to wild bighorn sheep resurgence in Montana.

Those two organizations  – the national Wild Sheep Foundation, whose headquarters are now in Bozeman, Montana, and the Montana Wild Sheep Foundation based in Missoula – have been the most vitally involved groups in the resurgence of wild sheep populations in Montana and they  joined with Stoneydale Press to get Reeves’ book into print.  The book’s author dedicated his new book to the late Duncan Gilchrist of Hamilton, who three decades ago authored several major books on Montana’s bighorn sheep that at the time helped draw attention to the need to protect the species from the ravishment of diseases contracted through exposure to domestic sheep (an issue still at play in some locations in the state).

“Giant Rams of Montana” was issued in 6×9-inch format in two distinct editions: a general softcover edition that retails for $29.95 and a special hardcover, limited and numbered collector’s edition of 200 copies that are being sold on a first-come, first-serve basis for $100.00 direct from Stoneydale Press.  The general edition of the book will be available in many bookstores, gift shops and sporting goods stores across Montana or direct from Stoneydale Press, 523 Main Street, Stevensville, Montana 59870, phone 406-777-2729 or on its website: www.stoneydale.com

A special premiere release of “Giant Rams of Montana” will take place in early February at the annual convention of the Wild Sheep Foundation in Reno, Nevada, where Reeves will be available to sign copies of the new book and discuss the process of putting the book together. Later signings will be arranged at a number of outlets in several cities across the state.