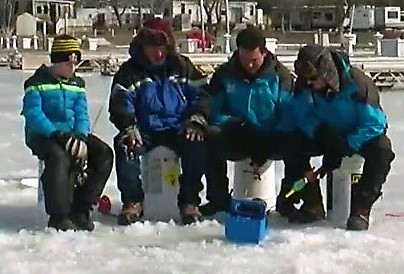 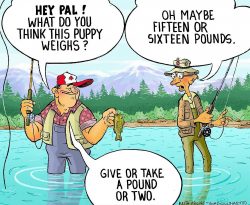 Most fishermen lie a little. Some more than others. Rarely can fishermen honestly measure a fish. Somehow a 20-inch trout miraculously grows by 10 inches. Several caught fish become a couple dozen, and a fishermen’s skill is elevated beyond reason.

This reminds of a story I heard from two guys sitting on the ice at Canyon Ferry last season. They were exchanging lies and trying to outdo each other. Both were masters of the “art of BS! “

One Old Fart Ice Man began bragging about a huge 300-pound salmon that he caught in Alaska. The story went on and on until the other man started talking.

The second Old Fart said that he had never caught a fish that large but had once snagged a lantern from the depths of Canyon Ferry Lake. The lantern still had a tag on it and was lost in 1920. The strangest thing was that the lantern was labeled as waterproof and the light was still on!

For a long time, neither Old Fart said anything. Both puffed on their cigarettes and jigged their rods. “I’ll tell you what I will do” said the first Old Fart, “I’ll take 200 pounds off my fish if you put the light out on your lantern!”

Now maybe the stories are slightly closer to the truth!

For more Montana Grant, find him telling stories at www.montanagrantfishing.com.