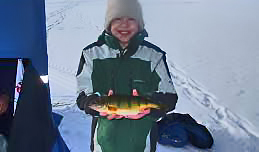 Smith Lake
8-10” of ice. Lots of Pike and a few decent Perch reports.

Blanchard Lake
About 5” of ice & slush. A few nice Perch and smaller Crappie. Reports of a few Pike thrown in as well.
​
Stillwater
8” of ice. Perch fishing is on and off. Some small Pike being caught with tip-ups.

Beaver Lake
Now has about 3-5” of ice. Reports of a few nice Rainbows along with Salmon. USE CAUTION as some springs are still open.

Rodgers Lake
About 5” of ice. Be patient and get rewarded with a nice Cutthroat. There are reports of a few nice Grayling being iced as well.

Lake Monroe
Good ice, about 5-7”. Lots of smaller Perch along with a few nice ones mixed in. The Pike fishing has been good as well.

Little McGregor
Around 5” of ice. Perch bite has been good, but not much for size. There are some fair Rainbows being caught though.

Thompson Chain
Upper has good ice (5-7”). Perch fishing is best in deeper water. Middle is UNSAFE but reports of people fishing the shore lines. Lower is on and off again for Perch.

Bitterroot Lake
There is some ice on the North end (about 3”) but use EXTREME CAUTION! No reports of fish being caught.

McWenneger Slough
Reports of 2-5” of ice. It is safe out front, but USE CAUTION in main body and NE End. A few keeper Perch and Pike.

Church Slough
Ice is holding about 5”. Good Pike fishing using tip-ups or Jaw Jackers. Crappie has been slow, but lots of small Perch.

Echo Lake
No recent reports, but the bays are fishable. BE CAREFUL in the main body due to thin ice!

​Lake Mary Ronan
Anywhere from 2-5” of ice. No reports of people crossing over the middle to the West side. Perch being caught in front of Tuffit, State Park and Mountain Meadow Resort.