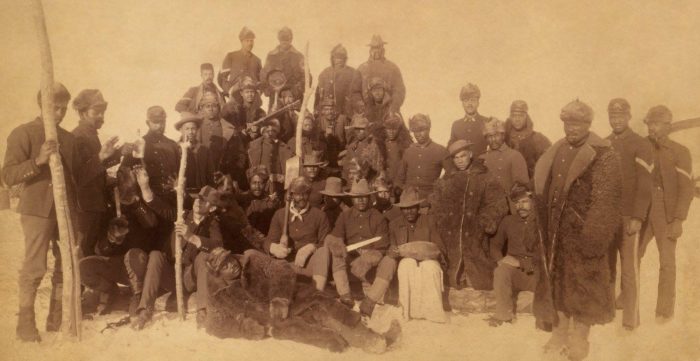 A Knowledge Nugget of Montana History
By angelamontana

The year 1910 saw the establishment of Glacier National Park, but it was also the year of the “Big Burn,” when wildfires burned over 3 million acres in Montana, Idaho, Washington, and neighboring areas of Canada. In Glacier, a large swath of the park burned along its southern border, near Essex, MT. William Logan, Glacier’s first superintendent, asked for Army troops to help fight the blaze and the 25th Infantry answered the call.

The 25th Infantry was a unit of African American soldiers known as Buffalo Soldiers. After the Civil War, Congress established four such units of black soldiers (two cavalry and two infantry). In addition to serving in conflicts such as the Spanish-American War, Buffalo Soldier regiments are known for their service on the western frontier. Years before the National Park Service was established in 1916, they were some of the first caretakers of national parks. In parks such as Yosemite and Sequoia, soldiers would protect wildlife from poaching, fight wildfires, and build trails, roads, buildings, and bridges.

During the 1910 fires in Glacier, companies from the 25th Infantry were stationed at Lake McDonald, Nyack, Belton, and Essex. The company at Essex experienced particularly dangerous conditions. They faced smoke, falling trees, unfamiliar country, patrolling at all hours, and tensions with local civilians. However, it’s said not a single fire attacked by the soldiers rekindled.

In a letter to the Secretary of the Interior, Superintendent Logan urged that the 25th Infantry receive commendation from the War Department for their work: “I doubt if I can say enough in praise of Lieutenant Mapes and his negro troops. The work performed by them could not be improved upon by any class of men. To their lot fell the worst fire in the park and they went at its extinguishment with snap and energy, built roads and trails and miles and miles of fire guard trenches without the least sign of discontent.”

It is said that Soldier Mountain, located in the southern part of Glacier near Essex, is named for the Buffalo Soldiers who served so valiantly. This photo shows the 25th Infantry at Fort Keogh in Montana in 1890. Some of the soldiers are wearing buffalo robes.

You can find more information about Buffalo Soldiers and their ties to the NPS here: https://www.nps.gov/subjects/buffalosoldiers/index.htm